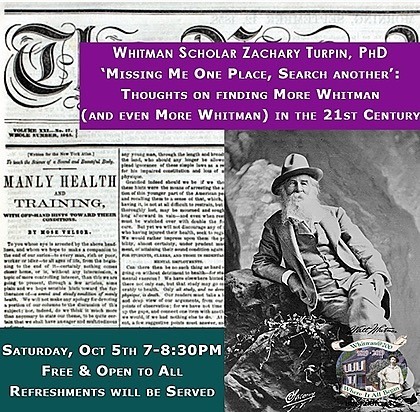 Missing Me One Place, Search Another’: Thoughts on Finding More Whitman (and Even More Whitman) in the 21st Century

Whitman Scholar Zachary Turpin will be presenting a slideshow about his discovery of Whitman’s pen-name and subsequent discovery of previously unknown Whitman writing.
Free and Open to All–Refreshments will be Served

In 2016, Zachary Turpin, then a doctoral student at the University of Houston, uncovered something the world had long ago stopped expecting: a new book by Walt Whitman. Titled Manly Health and Training and published in 1858 under a pen name, this long-lost, book-length men’s wellness treatise totally upends the traditional understanding of what Whitman wrote, published, and pursued during the infancy of Leaves of Grass. This discovery was followed, in 2017, by Turpin’s recovery of another priceless treasure: Life and Adventures of Jack Engle (1852), a novel Whitman wrote and serialized anonymously while he was first composing Leaves. Now, the Walt Whitman Birthplace is proud to host Turpin as he details the lost Whitman books that may still be at large; the exciting new methods that empower anyone and everyone to search for them; and the old-fashioned pleasures of reading in the archives.

Your ticket for the: Whitman Scholar Zachary Turpin Oct 5th