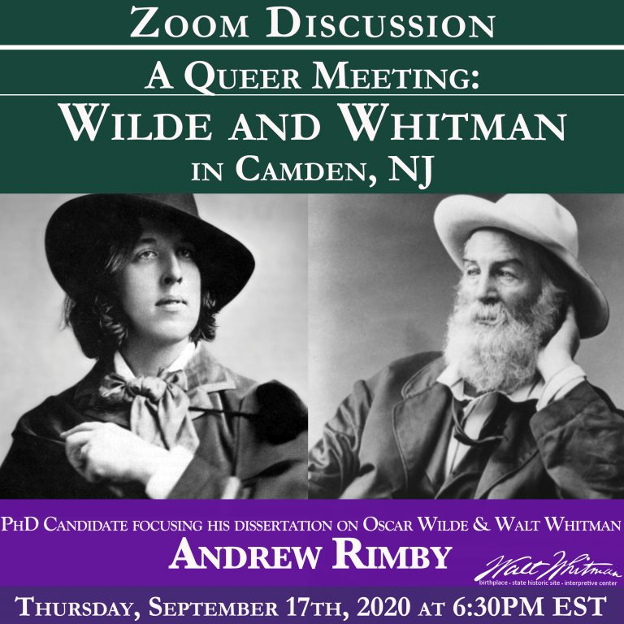 “A Queer Meeting: Wilde And Whitman In Camden, NJ” a discussion with Andrew Rimby, a Ph.D. candidate focusing his dissertation on Walt Whitman.

WWBA is delighted to present “A Queer Meeting: Wilde and Whitman in Camden, NJ,” a discussion with Andrew Rimby, a PhD Candidate focusing his dissertation on Walt Whitman life and literary legacy. You may remember Andrew Rimby as our hike leader, heading up to the top of Jayne’s Hill: https://youtu.be/Cdn7g_NjetI We’re happy to have him back, so please join us for this exciting event!

The year is 1882, celebrated Victorian novelist Oscar Wilde has just arrived in NYC to begin the first of his many lectures, in America, on the philosophy of beauty. Right after finishing his lecture in Washington Square Park, Wilde demands to his press team to arrange for him to meet Walt Whitman, who he knew lived in Camden, across from Philadelphia which was his next lecture stop. Why was Wilde so insistent and infatuated with meeting Whitman? Literary scholars have written that Wilde’s major motive to meet Whitman was to learn how to become a literary celebrity. A motive that has not been discussed in scholarship but is the starting point for this talk and my project, is Wilde’s claim to a journalist that he still had the “kiss of Whitman on his lips.” I will argue that Wilde’s desire to meet Whitman was not motivated for knowledge about becoming a literary celebrity but about meeting an American poet who openly discussed male same-sex desire in his literature.

Andrew Rimby is a Ph.D. Candidate in the English department at SBU. His dissertation, “The Pool of Narcissus: Transatlantic Homoerotic Attachments (1837-1901), argues that Walt Whitman, Oscar Wilde, and other 19th-century writers use ancient Greek allusions to express male homoerotic desire before the term “homosexuality” is invented. He is a 2019 Guiliano Global Fellow, a 2019-2020 Public Humanities Fellow, and a 2019 Stony Brook Graduate Fellow in the Arts, Humanities, and Lettered Social Sciences.