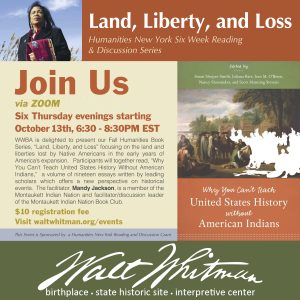 WWBA is delighted to present our Fall Humanities Book Series, “Land, Liberty, and Loss” focusing on the land and liberties lost by Native Americans in the early years of America’s expansion. Participants will together read, “Why You Can’t Teach United States History Without American Indians,” a volume of nineteen essays written by leading scholars which offers a new perspective on historical events. The facilitator, Mandy Jackson, is a member of the Montaukett Indian Nation and facilitator/discussion leader of the Montaukett Indian Nation Book Club.

Thirteen copies of the book, “Why You Can’t Teach United States History Without American Indians,” are on loan from Humanities New York for for a $5.00 deposit which will be refunded when the book is returned at the close of the book discussion. They are available for pick up at Walt Whitman Birthplace Association, 246 Old Walt Whitman Road, Huntington Station, NY 11746. Please email events@waltwhitman.org to schedule a time for pick up.

There is a $10 registration fee that covers 6 meetings.
To pay, click here: https://www.paypal.com/us/fundraiser/charity/2197152