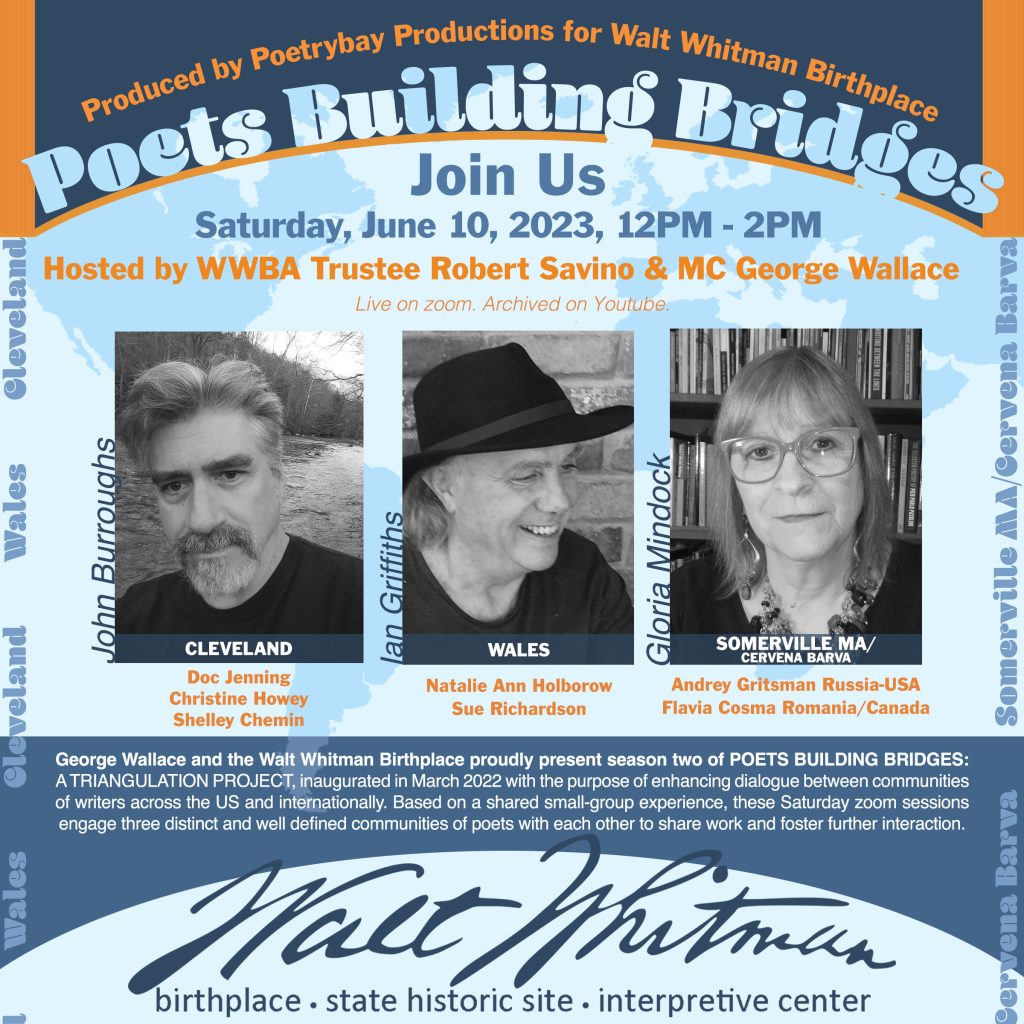 Season One triangulated groups by location — from the US, UK, Italy, South America, the Balkans, the Near East and India.

Doc Janning is the 80-year-old inaugural Poet Laureate of the city of South Euclid, Ohio. He has created Ekphrastic Poetry for Heights Arts and for Cleveland Photo Fest. Doc is Moderator of First Wednesday Poets, Creator-Host of Awenites, and a featured reader for poetry events around the world, is included in twenty-five anthologies, has had individual poems published on La Hermosa Bruja, and by PoemHunter.com, and videos on YouTube from a variety of readings.

Christine Howey is a performance poet, stage actor and director, playwright, theatre critic and the former executive director of Literary Cleveland. Her one-person play about her transgender journey, Exact Change, consists of 40 poems. It premiered at Cleveland Public Theatre and was an official selection of the 2015 New York International Fringe Festival. She then adapted the play into a film, which was an official selection of the Chagrin Documentary Film Festival in 2018.Christine has had four chapbooks of poetry published and was named Poet Laureate of Cleveland Heights, Ohio for 2016-2018. She is also a slam poet and competed in the National Poetry Slams in 2013 and 2017, as a member of the four-person Cleveland team  Christine was awarded a Creative Workforce Fellowship in 2014 from the Community Partnership for Arts and Culture, and an Individual Excellence Award from the Ohio Arts Council in 2016. She was honored to receive both the Illumination Award as the Transgender Leader of the Year in northeast Ohio for 2015, and the Torch Award for leadership on transgender issues from the Cleveland chapter of the Human Rights Campaign in 2017.

Shelley Chernin  is an environmental activist and ukulele enthusiast who has been writing poetry on and off for most of her life. She is the author of The Vigil, published by Crisis Chronicles Press in 2012. Her poems have appeared in many journals and anthologies, including Great Lakes Review, Scrivener Creative Review, Guide to Kulchur Creative Journal, Rhapsoidia, Durable Goods, Big Bridge, and Oct Tongue-1. She was awarded Second Place in the 2011 Hessler Street Fair Poetry Contest and received Honorable Mentions twice in the Akron Art Museum’s New Words Poetry Contest. Shelley has read her poems and played ukulele in many venues, including Mac’s Backs, Visible Voice Books, Mahall’s, The Beachland Ballroom, numerous libraries, coffee shops, parks, bars and street corners.

Natalie Holborow is a poet and marketer from Swansea. She was the winner of both the Terry Hetherington award and Robin Reeves Prize in 2015. She is author of Small and And Suddenly You Find Yourself, which was launched at the Kolkata International Book Festival and listed as one of Wales Arts Review’s Best of 2017. She is co-editor of Cheval and a proud patron of the Leon Heart Fund.

Gloria Mindock  is editor of Červená Barva Press. She is an award-winning author of 6 poetry collections, 3 chapbooks and a children’s book. Her poems have been published and translated into eleven languages. Her recent book, Ash (Glass Lyre Press, 2021) has received 6 book awards and was translated into Serbian by Milutin Durickovic and published by Alma Press in Belgrade in 2022. Gloria’s work recently has appeared in Gargoyle, The James Dickey Review, 10 x 10, Ibbetson, Growth: Journal of Literature, Culture, & Art (Macedonia) and others. Gloria was the Poet Laureate in Somerville, MA in 2017 & 2018. For more information, visit her website at: www.gloriamindock.com

Andrey Gritsman A native of Moscow, Andrey emigrated to the United States in 1981. He is a poet, essayist and a physician. Gritsman have published ten volumes of poetry and prose in Russian and six in English. He received the 2009 Pushcart Prize Honorable Mention XXIII and was nominated for the Pushcart Prize several times. His poems, essays, and short stories in English have appeared and forthcoming in over 90 literary journals, including Nimrod International Journal, Cimarron Review, Notre Dame Review. His work has also been anthologized. Andrey received MFA in poetry from Vermont College and runs the Intercultural Poetry Series in New York City.

Flavia Cosma is a Canadian writer, poet and translator. Flavia is also a producer/ director for television documentaries. An author with more than 50 books, she has been published in various countries. Cosma’s poetry books Leaves of a Diary, Thus Spoke the Sea and The Latin Quarter were studied at Universities in Canada and USA. Flavia received numerous distinctions and awards for her literary work. Flavia Cosma is a member of the League of Canadian Poets, Union des Ecrivains du Quebec, Writers’ Union of Romania. She is the director of The Biannual Writers’ and Artists’ Festivals at Val-David, QC, Canada. www.flaviacosma.com