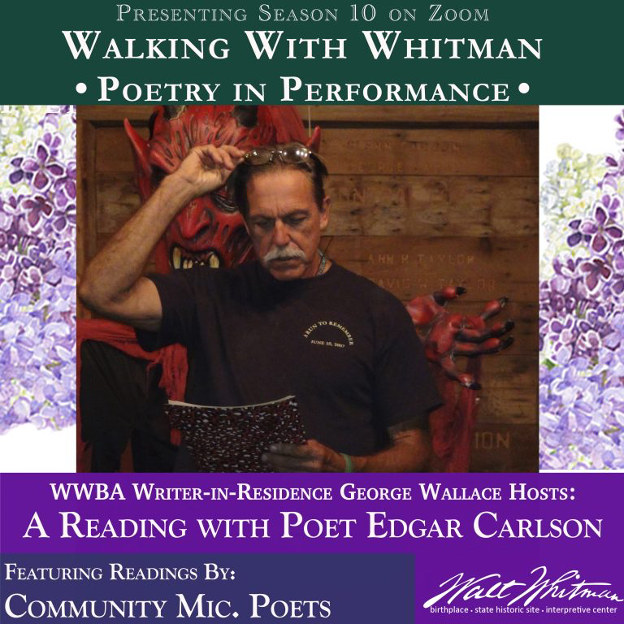 WWBA is delighted to present Walking With Whitman: A Virtual Poetry Reading with Poet Edgar Carlson and Community Mic. Poets. This is the 10th season of Poetry in Performance: Walking With Whitman, hosted by Writer-in-Residence George Wallace. The signature series continues to bring the most intriguing figures in contemporary literature on the national scene paired with local poets on the Walt Whitman Stage.

Edgar Carlson is a landscape-gardener, poet, taxi driver and grandfather. A resident of Farmingdale, he studied creative writing at Adelphi University’s Graduate Fine Arts program, and has served on the Nassau County Poet Laureate committee. Edgar has been writing poetry since Lyndon Johnson was president.

Linda Sussman is a Long Island, NY-based singer-songwriter whose music blurs the lines of contemporary folk and blues. With vocals reminiscent of Joan Baez infused with shades of Joni Mitchell and a strong fingerpicking guitar style with a touch of slide, Linda delivers her songs straight from the heart — honoring the human spirit, celebrating triumphs, rallying for justice, and some just for fun. (lindasussman.com)

Britney Russell (Bexpressivesoul) is a 23-year-old International Poet that sprang from the fruitful soil of Jamaica. She can be found on any social media platform as Bexpressivesoul.

Eric Hafker holds a B.A. in English and M.A. in Creative Writing from Queens College, CUNY, and was the recipient of its 1990 James R. Kreuzer Poetry Prize. He also studied at the Goethe Institute in Murnau, Germany.

Kim Ward is a multimedia artist and the founder of The Vermont Playwrights Circle. Her short plays have been performed around Vermont and her poetic play, Angel in the Fire was accepted into the Last Frontier Theater Conference in 1998.

Kyle Singh is an Astronomy researcher at Columbia University and resides in Hicksville, NY. He has been published in several outlets and most recently had his poetry featured in Down in the Dirt Magazine.