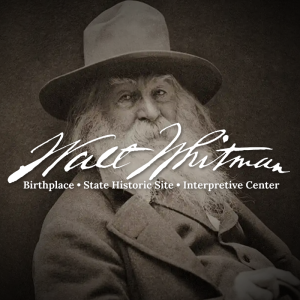 Children of all ages will enjoy a performance of Irish dancing by teachers and students from the Mulvihill-Lynch Studio of Irish Dance, known regionally, nationally, and internationally as champions on the competitive circuit. The award-winning dancers will also interact with the audience—answering questions and teaching some Irish dance steps (and find out if Irish dance is in your future). Hear the fascinating history about the costumes and dances. After the show, join us for a guided tour of the Walt Whitman Birthplace! The historic home where Walt Whitman was born in 1819.
$9.00 per child, chaperones free!

Tickets are no longer for sale online, please pay at the door (the same price, $9 per child/chaperones FREE).
All are welcome!! 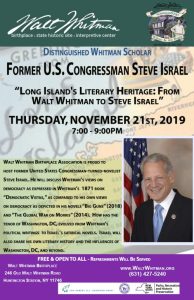 The Left Behind – An Exhibition
Steve Gittelman, Designer
Join us for this haunting historical exhibition opening reception & discussion. Perfect for an early Halloween experience.
A Special Exhibit in our Gathering House about the effects of the Cholera Epidemic while Whitman lived in Manhattan at age 13. If you lived in Manhattan and did not own a horse at that time, you were left behind to face the cholera epidemic alone.
Free & Open to All. Refreshments will be served. 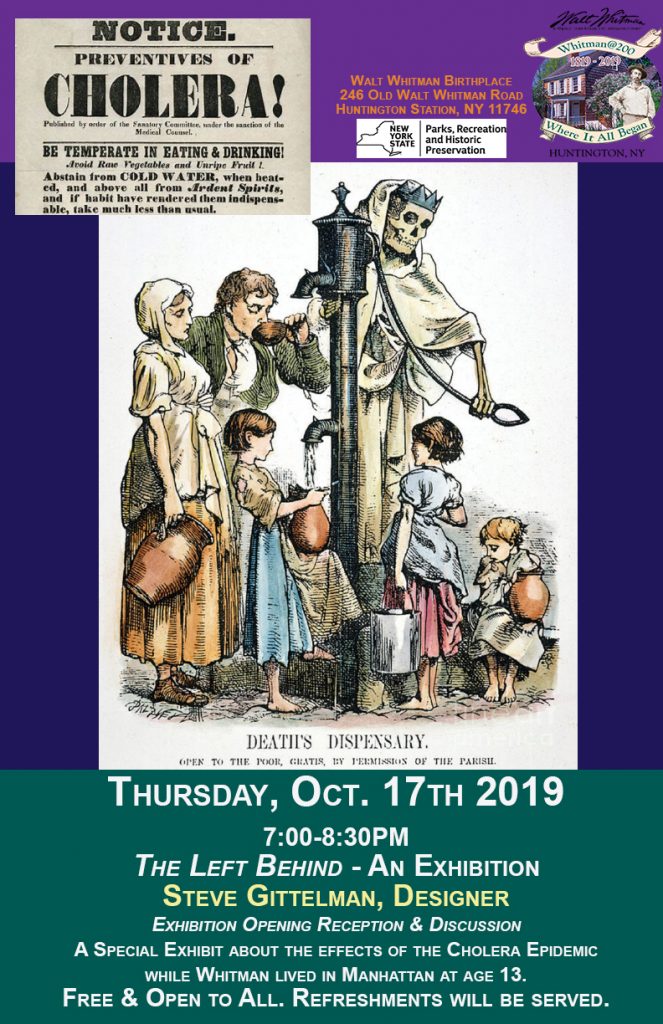 Arrive at 6:00PM for a Spooky Candlelight Tour of the Historic Birthplace. See the house as you never have before!
Featuring Performance by Whitman Personator: Darrel Blaine Ford. Darrel will speak as Whitman and describe his life and times in the house. ($6 admission).
Afterwards, at 7pm enjoy a FREE exhibit and discussion for The Left Behind designed by Steve Gittelman. Open to all, refreshments will be served. 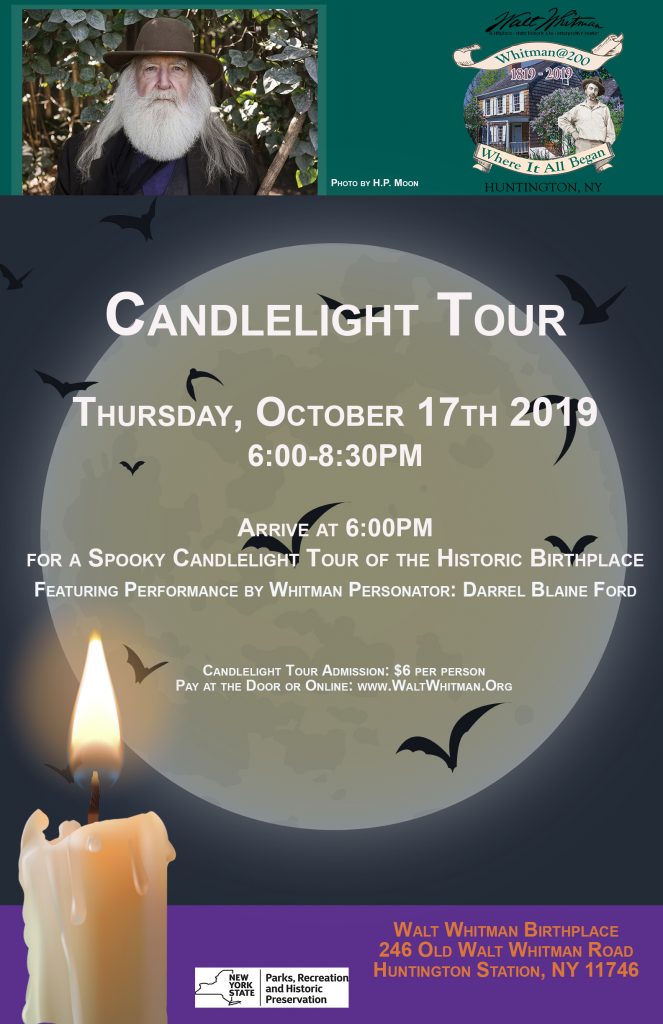 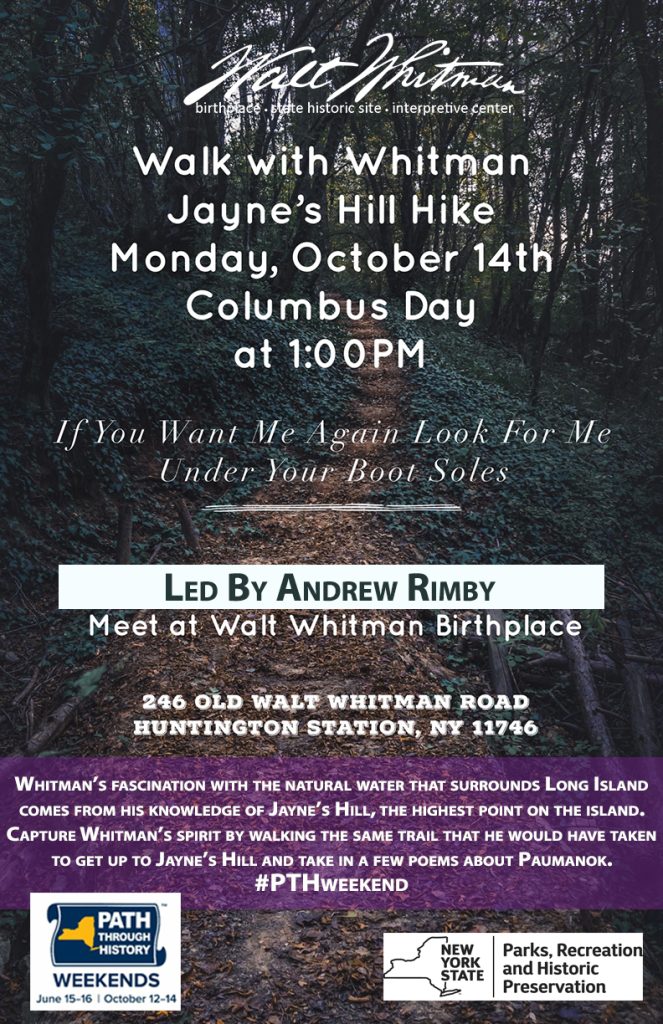 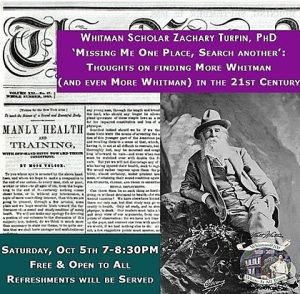 Missing Me One Place, Search Another’: Thoughts on Finding More Whitman (and Even More Whitman) in the 21st Century

Whitman Scholar Zachary Turpin will be presenting a slideshow about his discovery of Whitman’s pen-name and subsequent discovery of previously unknown Whitman writing.
Free and Open to All–Refreshments will be Served

In 2016, Zachary Turpin, then a doctoral student at the University of Houston, uncovered something the world had long ago stopped expecting: a new book by Walt Whitman. Titled Manly Health and Training and published in 1858 under a pen name, this long-lost, book-length men’s wellness treatise totally upends the traditional understanding of what Whitman wrote, published, and pursued during the infancy of Leaves of Grass. This discovery was followed, in 2017, by Turpin’s recovery of another priceless treasure: Life and Adventures of Jack Engle (1852), a novel Whitman wrote and serialized anonymously while he was first composing Leaves. Now, the Walt Whitman Birthplace is proud to host Turpin as he details the lost Whitman books that may still be at large; the exciting new methods that empower anyone and everyone to search for them; and the old-fashioned pleasures of reading in the archives. 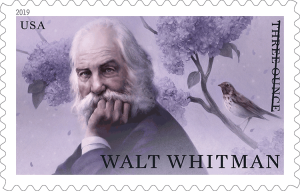