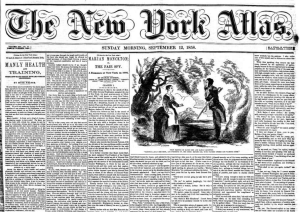 Photo: Walt Whitman Quarterly Review At The University Of Iowa
Walt Whitman’s “Manly Health and Training” series was published in the New York Atlas in 13 installments in 1858. The first installment fills much of the left two columns of this front page

Much of Walt Whitman’s journalism has been lost to the ages, published under pen names and buried in the faded folds of 19th-century newspapers that have never been digitized.

But University of Houston scholar and doctoral candidate Zachary Turpin has discovered a 13-part, 47,000-word series the poet wrote for the New York Atlas in 1858, under the name Mose Velsor.

“Manly Health and Training” is “part guest editorial, part self-help column,” a rambling and self-indulgent series that reveals Whitman’s thoughts on topics ranging from diet and exercise to sex, bathing, footwear and gymnastics. It’s valuable, says Whitman scholar Ed Folsom, because it fills in some gaps in Whitman’s biography and could add cultural context to the poems he was writing before the Civil War.

The University of Iowa-based Walt Whitman Quarterly Review has published the entire 13-part series – and an introductory essay by Turpin’s online today. Click here to read it now.

“Look at the brawny muscles attached to the arms of that young
man, who, for nearly two years past, has devoted on an average two
hours out of the twenty-four to rowing in a boat, swinging the dumbbells,
or exercising with the Indian club. Look at the spread of his
manly chest, on which also are flakes of muscle which rival those of
the ox or horse.—(Start not, delicate reader! the comparison is one to
be envied.)
Two years ago that same young man was puny, hollow-breasted,
walking home at evening with a languid gait, and eating his meals
with less than half an appetite. Training, and the simplest amount of
perseverance, have altogether made a new being of him.
Training, however, it is always to be borne in mind, does
not consist in mere exercise. Equally important with that are the
diet, drink, habits, sleep, &c. Bathing, the breathing of good air, and
certain other requisites, are also not to be overlooked.”

-from “Manly Health and Training”

Your ticket for the: University of Houston student uncovers an unknown work by Walt Whitman