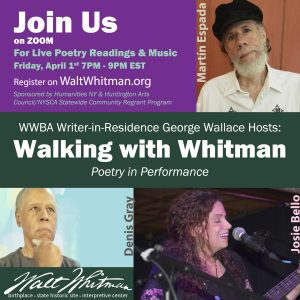 Walt Whitman Birthplace Association (WWBA) presents the 12th season of “Poetry in Performance: Walking With Whitman,” hosted by WWBA Writer-in-Residence George Wallace. The signature series continues to bring the most intriguing figures in contemporary literature on the national and international scenes paired with local poets on the Walt Whitman Stage.

This program is made possible with funds from the Statewide Community Regrant Program, a regrant program of the New York State Council on the Arts with the support of the Office of the Governor and the New York State Legislature and is administered by The Huntington Arts Council, Inc.

Martín Espada has published more than twenty books as a poet, editor, essayist and translator. His latest book of poems is called Floaters, winner of the 2021 National Book Award and a finalist for the Los Angeles Times Book Prize. Other books of poems include Vivas to Those Who Have Failed (2016), The Trouble Ball (2011), The Republic of Poetry (2006) and Alabanza (2003). He is the editor of What Saves Us: Poems of Empathy and Outrage in the Age of Trump (2019). He has received the Ruth Lilly Poetry Prize, the Shelley Memorial Award, the Robert Creeley Award, an Academy of American Poets Fellowship, the PEN/Revson Fellowship, a Letras Boricuas Fellowship, and a Guggenheim Fellowship. The Republic of Poetry was a finalist for the Pulitzer Prize. The title poem of his collection Alabanza, about 9/11, has been widely anthologized and performed. His book of essays and poems, Zapata’s Disciple (1998), was banned in Tucson as part of the Mexican-American Studies Program outlawed by the state of Arizona. A former tenant lawyer in Greater Boston, Espada is a professor of English at the University of Massachusetts-Amherst. http://www.martinespada.net/

Denis Gray is a playwright, fiction writer, and poet who lives on Long Island with his wife Barbara. He is the author of several novels that explore the world of blues and jazz musicians who struggle to overcome the obstacles in a city where success is marginal and failure is predicted, all while attempting to leave their mark with their dynamic talent and inventive jazz compositions. The works, from which the author reads with particularly infectious power drive, include Benny’s Last Blast!!, Black Love Notes, Lucky, and Della’s Deed.

Josie Bello is a singer-songwriter who lives in Huntington.  She has released 3 albums of original music. The latest one, Resilience, came out February 2022.  Josie’s music has been heard all over the world and has appeared on American and European Folk Radio Charts. You can listen to Josie’s music on YouTube, Spotify, Pandora and anywhere that music is streamed.  For more information about Josie and her music, please visit her website at JosieBello.com

For more about Walking With Whitman, click here: https://www.waltwhitman.org/events/adult-programs-2/www/

Your ticket for the: Walking With Whitman Featuring Martín Espada, Denis Gray, and Josie Bello