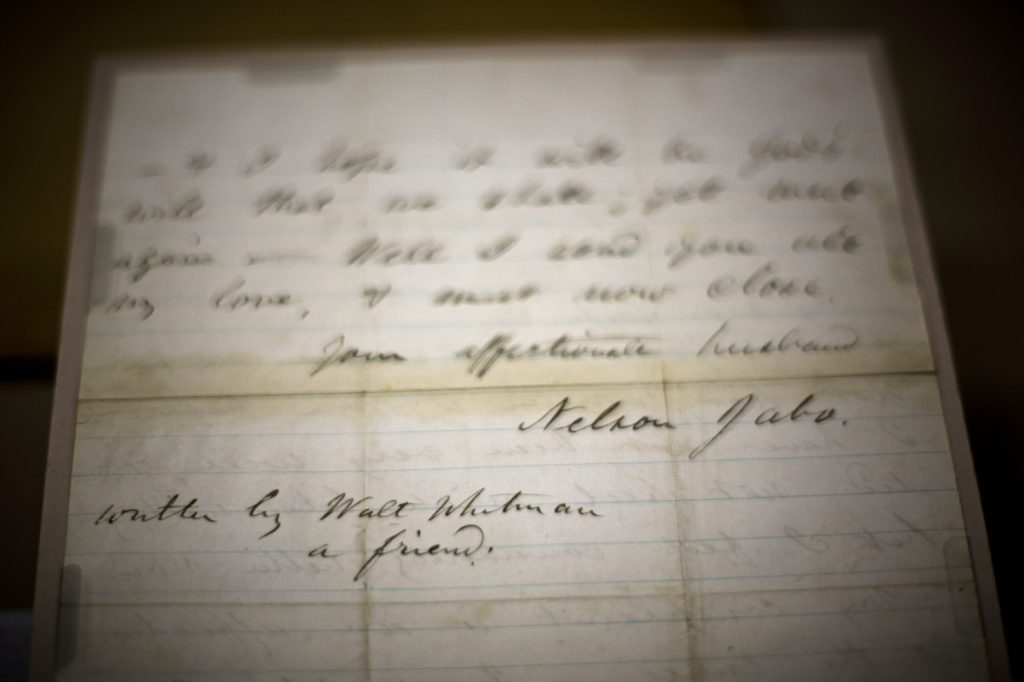 Pvt. Robert N. Jabo, of the 8th New Hampshire infantry, was dying of tuberculosis in Washington’s Harewood Hospital and needed to write to his family.

The Civil War had been over for months. Most soldiers had gone home. And Jabo’s wife and six children were no doubt wondering where he was.
But he was sick and illiterate. So a cheerful, bearded man who regularly visited hospitalized soldiers offered to write a letter for him.
“My dear wife,” it began, “you must excuse me for not having written. . . . have not been very well.” The letter explained that it was penned by “a friend who is now sitting by my side.”
And in a postscript, the friend identified himself: “Walt Whitman.” Archives specialist Jackie Budell at the Archives of the United States. Budell’s project on Civil War pension documents recently unearthed a letter written by Walt Whitman on behalf of an illiterate dying soldier to the soldier’s wife. (J. Lawler Duggan/For The Washington Post)

The rare Whitman “soldier letter,” one of only three known to exist, was discovered last month by a National Archives volunteer who is part of a team preparing Civil War widows’ pension files to be digitized and placed online.
“It doesn’t get much bigger, in my eyes,” said Jackie Budell, an archive specialist who oversees the project. “It’s just simply stunning. . . . We’re not going to find another one like this, probably, for a while.”
Whitman, the American poet, journalist and essayist, was known for making the rounds of the local hospitals, where he would dispense snacks and money. He would also sit with wounded and dying soldiers and write letters for them.

“I do a good deal of this, of course, writing all kinds, including love letters,” Whitman wrote in a dispatch for the New York Times in 1864.
“Many sick and wounded soldiers have not written home to parents, brothers, sisters, and even wives . . . for a long, long time,” he wrote. “Some are poor writers, some cannot get paper . . . many . . . dread to worry the folks at home — the facts about them are so sad to tell.”
“I always encourage the men to write, and promptly write for them,” he wrote. A century and a half later, few of those letters have surfaced.

But late on the afternoon of Feb. 3, volunteer Catherine Cusack Wilson found one.
Wilson, a librarian in Falls Church, was sorting through pension files in the preparation room at the archives building in downtown Washington when she pulled the Jabo file from its large brown envelope.
Her task was to look through the papers to make sure nothing had been wrongly filed and check to see whether any document was damaged and needed conservation.
The files often contain letters from soldiers to their families, which Wilson said she loves to read.

Content from Canon“We’re in the middle of this crazy city and I’m just trying to take photos.”
Walk the streets of NYC with teenage photography sensation Ryan Parrilla.

Frequently, soldiers wrote to say that they were sending home money or to describe camp life. “It’s fascinating to me,” she said in a telephone interview last week.

Last month, she said, “I’m looking through the file, and I see this letter, and I start reading it,” she said. “You don’t expect anything, but you look forward to finding something.”
The letter was written on both sides of a plain sheet of lined paper, which was probably Whitman’s. It was written with a pen in neat, legible script, probably on Jan. 21, 1866.
“I am mustered out of the service but am not at present well enough to come home,” it says on the front side. “My complaint is an affection of the lungs. . . . I hope you will try to write back as soon as you receive this and let me know how you all are.”
Wilson, of Arlington, turned the letter over.
“Well I send you all my love, and must now close,” it ends. “Your affectionate husband . . . ”
Two lines down, came the surprise: “Written by Walt Whitman, a friend.”
“Ah!” Wilson said she exclaimed. “Look what I found!”
Wilson, one of 25 volunteers, showed the letter to Budell, who was at first cautious. “Part of my job is authenticating such finds,” Budell said.
She contacted David S. Ferriero, who heads the National Archives.
Ferriero is a huge Whitman fan, and as a young Navy hospital corpsman during the Vietnam War, he wrote letters home for wounded Marines.
He sent a scan of the letter to Whitman scholar Kenneth M. Price, at the University of Nebraska, where he is co-director of the Walt Whitman Archive and an expert on Whitman’s handwriting.
Price noted the unique way Whitman wrote the letters x, d, and I, as well as how he often used a plus sign instead of the word “and.”
Whitman’s signature at the end of the letter resembles other Whitman signatures, Price said in an email.
And the fact that the letter turned up in the archives, and not on the market, makes “forgery . . . extremely unlikely,” he said.
Price determined that the letter was Whitman’s. It will now be housed in a vault at the National Archives with other valuable documents.

Jabo was a French Canadian who lived in Clinton County, N.Y., on the Canadian border, Budell said. He was in his 40s, and his real name appears to have been Robert Narcisse Gibeau, she said.

But the last name also appears some places as Gebo, and Whitman used the first name, Nelson, when signing the letter for him.
Jabo first enlisted in the 96th New York infantry regiment but was discharged after a year because of a disability, Budell said.
He spent several months at home and then signed on with the 8th New Hampshire as a “substitute,” an arrangement in which he was probably paid about $300 to serve in place of another.
“He obviously is a man with six kids at home who needs the money,” Budell said.
But he remained sickly and cycled through a series of hospitals, suffering from back trouble, typhoid, diarrhea and bronchitis, according to his file.
He was discharged from the army in October 1865, seven months after the war ended, but was still too sick to go home, Budell said. She added that Jabo was probably illiterate because he signed his name with an X on other documents.
“What happens is he spends his time still in D.C. hospitals,” she said. “And, of course, his wife is probably still wondering what’s happened to him. . . . So Walt would be his saving grace to say, ‘I can write this letter for you home to your wife.’ ”
It must have been an intimate moment.
Perhaps Whitman coached the soldier, Budell said. Jabo might have said, “I’m not sure what to say to my wife,” she said. “Maybe [Whitman’s] kind of helping pull out his thoughts.”
To Adeline Jabo, Whitman wrote on her husband’s behalf, “I hope it will be God’s will that we shall yet meet again.”
The letter likely wound up in the Jabo pension file because it was needed to prove that his illness was related to his military service. That was required for his wife to get a pension.