The History of the Walt Whitman Birthplace Association

In 1819, Walt Whitman, widely recognized as America’s greatest poet, was born in a small farmhouse in the rural Long Island community of West Hills in the town of Huntington. Whitman’s writings are treasured for capturing the nation’s spirit during the nineteenth century and examining some of the era’s most significant events including westward expansion, immigration, slavery, and the Civil War.

Despite Whitman’s national prominence, during the twentieth century his family’s farmhouse in West Hills faced the continual threat of suburban encroachment. In 1949, Walt Whitman Birthplace Association (WWBA) was established to preserve his birthplace. Poets, authors, professors, businesspeople, and concerned citizens were among its founding members. To help raise awareness and funds to protect the farmhouse and its one-acre site, WWBA appealed to Alicia Patterson, then owner and publisher of Long Island’s newspaper Newsday. Patterson featured Whitman and the plight of his farmhouse on the cover of the newspaper and launched a fundraising campaign that inspired students across Long Island to collect pennies, nickels, and dimes for the cause. After three months and with widespread support, the Association purchased the property. Later, in 1957, WWBA was successful in its petition to Governor W. Averell Harriman to designate the birthplace a New York State Historic Site. In 1985, the property was listed on the NYS and National Registers of Historic Places. Today, the site is operated by WWBA in partnership with the New York State Office of Parks, Recreation and Historic Preservation (OPRHP).

Up until 1986, WWBA managed the site on a small scale with limited visitation and public programming. Subsequently, WWBA’s executive director Barbara Mazor Bart, convinced the Association’s board to promote the site as a center of learning and to make it more accessible to the public. The site’s educational programs were inaugurated in 1987. Since then attendance has risen from 1,000 to more than 16,500 annually. Almost one-third of the site’s visitors are students in grades 3–12. Among its various offerings, one of the site’s most successful initiatives is the annual student poetry contest, which receives 5,000 entries each year. The contest culminates at the Walt Whitman Birthday Celebration, which is held on the weekend closest to the poet’s May 31 birthday.

Each year, WWBA’s Board of Trustees selects a nationally recognized poet to be its Poet-in-Residence. From public readings of his or her own poetry to teaching master writing classes, these guest poets are helping to instruct and inspire the next generation of writers. WWBA also holds monthly poetry readings, including a marathon reading of Whitman’s masterwork Leaves of Grass. The Association also collaborates with the Long Island Poetry Collective on expanding regional writing opportunities. WWBA maintains a library of approximately 1,800 volumes at the site, which focuses on the poetry and life of Walt Whitman and includes an original edition of Leaves of Grass.

In the 1990s, to help accommodate the site’s increased visitation and expanding programs, the Association in partnership with OPRHP, planned an Interpretive Center at the site. Through the auspices of the 5th Senate District, Senator Ralph J. Marino introduced a member item in the state budget to fund the construction project. The center opened in 1997 and provides much needed space for a classroom, library, offices, gift shop, and collections storage as well as providing handicapped accessible bathrooms. With the relocation of site operations and exhibits to the new center, WWBA was able to focus its attention on restoring and refurnishing the farmhouse. Through the initiative of WWBA and the leadership of OPRHP Commissioner Bernadette Castro, a comprehensive restoration of the Birthplace was undertaken for the first time in 43 years. With technical assistance provided by the Long Island State Park Region and the Peebles Island Resource Center (PIRC), the house’s exterior was re-sheathed with smooth-finished, face-nailed cedar shingles, based on a surviving original shingle, and its nineteenth-century porch and shutters were reconstructed based on a 1890 photograph. The restoration was completed in 2000.

In addition, PIRC staff developed a new furnishing plan for the house in collaboration with WWBA curator Richard Ryan. The plan reflects the agrarian lifestyle of the Whitman family between 1816 and 1823. Almost half of the site’s collection (about 200 objects) is on display in the house. In 2005, the Barn was renovated and its original wood was used as floorboards for the new structure, named the Gathering House. This structure was dedicated in November of 2005. It is utilized as an environmental education classroom, exhibit space, and for small meetings.

The site has been featured in the December 1994 issue of National Geographic magazine, and its restoration was highlighted on a July 4, 2000 national television special hosted by Bob Vila. The Birthplace has been a frequent subject on CSPAN, and written about in The New York Times and Newsday in Long Island: Our Story. More recently, the site has been designated an “Official Project” under the national Save America’s Treasures program, helping to further recognize the property’s significance as well as offer fundraising opportunities.

In 2007, Cynthia Shor was selected by the Board of Trustees as executive director. She initiated the first Walt Whitman Family Reunion on 2008 with the intention of locating descendants, making an oral history documentary of family members, and mounting an exhibit of family artifacts relating to Walt Whitman. Thanks to the commitment, hard work, and enthusiasm of WWBA, the support of NYS Senator Carl L. Marcellino, as well as a flourishing partnership with OPRHP, the preservation and interpretation of the birthplace are helping visitors, writers, scholars, and especially children better understand and appreciate the life and work of Walt Whitman. 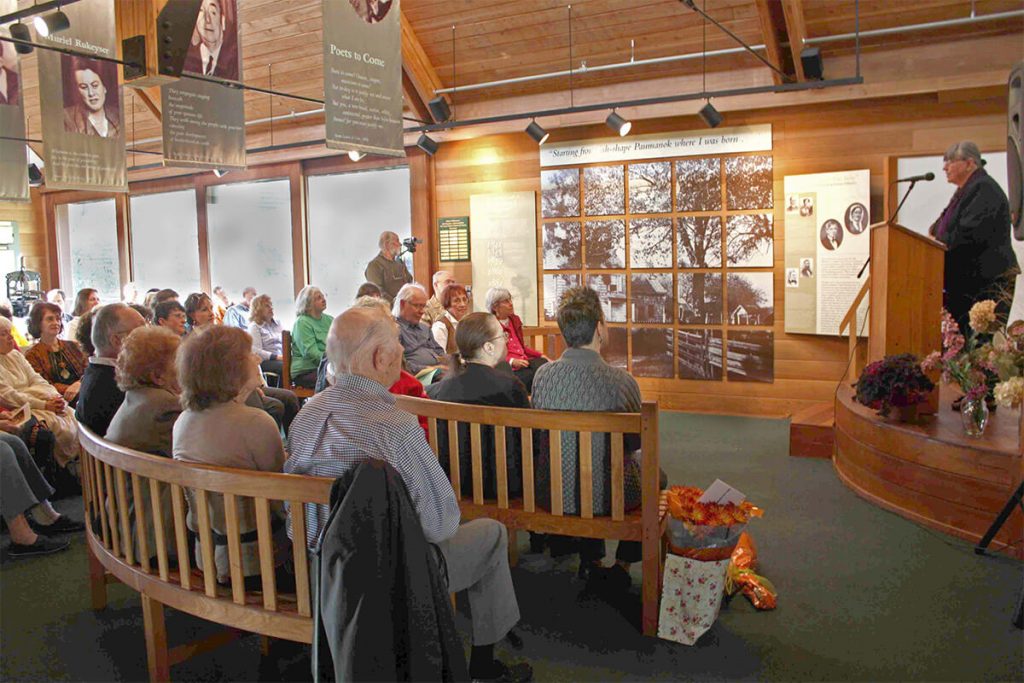 As Stewards of the Walt Whitman Birthplace, a New York State Historic Site, we preserve and promote the poet’s legacy with educational programs about his life and work, celebrating inclusivity and inspiring creativity.

Margaret Guardi received her BA in Literature at SUNY Oneonta. As a post graduate, she received a NYS Permanent Certificate in Secondary Education, English, and later completed coursework at SUNY Fashion Institute of Technology. Margaret has a lifetime interest in historical costume, and was a member of the Costume Society of America. From 2007–2013 she was a Trustee of The Huntington Historical Society, and for over 20 years was instrumental in cataloging and displaying their collection of historical dress. She is a current member of their Collection Committee.

Margaret began her activities at the Walt Whitman Birthplace as a volunteer guide, and currently is on the staff as Birthplace and Whitman Historian and Museum Curator. She manages the collection of historical objects, archives, and the library; planned and organized the cataloging project; curates exhibits; guides the college and graduate student interns with their independent study work; and administers the WWBA’s program for student volunteers who want to learn more about Museum Studies. Previously, she developed the Victorian Tea Party event for adults, presenting a historical lecture and a costume demonstration that places the elegant luncheon in a Whitman-era context.

A native Long-Islander, Margaret’s interests in Walt Whitman, genealogy, and local history were developed through travel, self-study, and research with original sources. Her results, which uncovered forgotten details of Whitman and Birthplace history, have been cited in scholarly articles and books. In 2014 she accompanied the WWBA Executive Director, Cynthia Shor, to Florida to accept the gift of a Whitman Family Bible, originally presented as a Christmas gift in 1878 by Walt to his sister Mary.

Bonnie has been a Long Island resident for the past 30 years. She received her BS in Accounting from Boston College and was Assistant Controller and later Vice President of Supply, for Meenan Oil Co., LLP/Petro Oil. Bonnie volunteers at her school district and has been a Special Education parent advocate and volunteer. She also owns and runs a small embroidery business. When Bonnie’s not at the Birthplace, she enjoys spending time with her husband and three boys, travelling, and visiting National parks, historic sites, and museums.

Heather was born and raised on Long Island. She graduated cum laude with a BA in Fine Arts in Computer Graphics from New York Institute of Technology in 1993. After graduation, she went on to work for Cablevision Systems Corp. Her career there lasted over 20 years, first as a Graphic Designer for Neighborhood News12 and later as Senior Graphic and Marketing Designer for their Education, Community, and Government Affairs Departments. In 2017 she became Assistant Creative Director at Motus Global. Heather has an appreciation for all things old and feels the need to preserve our history. In 2019 she worked with neighbors to save the 1924 Colonial Revival home in her neighborhood that was slated for demolition. She currently is a Trustee at the Wantagh Preservation Society and Secretary of the Farmstead Equestrian Team. She was Treasurer of the Equus Valley Pony Club as well as a Girl Scout Troop Leader for many years. Heather enjoys crafting and has a small crochet business on Etsy. She loves all animals and has a yellow Labrador named Juniper.