The Walt Whitman Champions of Literacy Award was established to recognize the best supporters of literacy in America. Champions of Literacy are people or businesses who have demonstrated outstanding leadership in promoting literacy. A connection to Walt Whitman—known as the Poet of Democracy and acclaimed as “America’s Shakespeare” according to eminent literary critic Harold Bloom—is not required, though it is considered a plus.

Literary Achiever Champions are individuals who enhance the impact of literacy through their body of work comprised of any writing genre: poetry, fiction, non-fiction, journalism, scriptwriting, screenwriting, and songwriting. They have gone beyond their craft and attained notable success in promoting and nurturing literacy.

Individual Leader Champions have achieved leadership roles in enhancing the positive image of reading for education, information, and enjoyment. Through notable efforts in organization, fundraising, enhancing public awareness, and advocacy of literacy issues, they have had extraordinary positive impact.

Enterprise Champions are CEOs of businesses or organizations that have demonstrated outstanding success in publicly promoting literacy. They need to have notably and heavily contributed to maintaining and promoting a place for the written and spoken word in literature.

Education & Cultural Arts Advocates are Champions who have demonstrated outstanding support for literary, cultural and historic organizations. They have notably and extensively contributed to maintaining a place for the written work through their efforts in sustaining and preserving institutions whose mission is to promote the cultural arts.

THE WWBA COMMITMENT TO LITERACY ECHOES THE EFFORTS OF WALT WHITMAN

Many of our programs help meet a crucial national need to enhance literacy. According to the Literacy Partners website www.literacypartners.org

“Over 97 million Americans cannot read beyond the fifth grade level and nearly 3.7 million New Yorkers need adult literacy services. An inability to read and compute hinders millions of individuals from reaching their potential as parents and citizens and prevents them from participating fully in society. Low literacy skills cost American businesses billions in lost productivity each year. High levels of functional illiteracy are felt throughout our community, leading to multigenerational cycles of poverty, poor health, school failure, higher tax burdens, and remain as obstacles to economic growth.”

The WWBA Vision for Literacy is implemented through following a rigorous two-part process centered on
1: Student Literacy and
2: Adult Literacy.

We aim to create a greater national passion for reading—for children, families, and adult learners alike. The result is a personal, effective, and enduring impact on our students and teachers, coupled with increasing appreciation of writing and reading poetry.

1. Offering structured literacy practices through a variety of multidisciplinary educational programs for students of all ages. This is accomplished through engaging reading and writing poetry activities, taught by certified teachers and published poets in an enjoyable non-competitive learning environment.
Over 7,000 students were served in 2010.

2. Promoting excellence in writing literacy through our annual Young Student Poetry Writing Contest. Over 4,000 entries in 2010.

6. Providing resources for teachers, literacy organizations, and anyone interested in reading and education.

2. Promoting excellence in writing through a variety of creative writing workshops including our annual Poet-in-Residence Masters Class in Poetry Writing.

3. Recognizing national excellence in writing through our annual Poet-in-Residence Award will be awarded in 2017 to Marilyn Hacker.

4. Recognizing local excellence in writing through our annual Long Island Poet of the Year Award will be awarded in 2017 to Tammy Nuzzo-Morgan.

5. Sponsoring a Whitman Writer in Residence George Wallace to assist with promotion and programming. 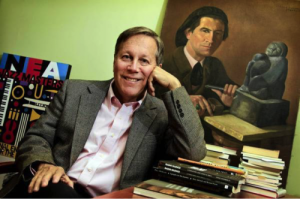 Dana Gioia is an internationally acclaimed, award-winning poet. A California-native, his career started far away from poetry. For fifteen years he worked for General Foods as vice president of marketing before resigning to pursue a full-time career as a poet. Before this Gioia was still an avid poet with his work gaining fame in the 1980s. His first collection was Daily Horoscope, released in 1986. In 2002, his third collection, Interrogations at Noon, was released, winning Gioia the American Book Award. From 2003 to 2009 Dana Gioia served as National Endowment of the Arts chairman. In 2015 he was named Poet Laureate of California. His latest work is 99 Poems: New & Selected, was released this year. Throughout his career, Gioia has been classified as a “New Formalist,” writing in traditional forms. He has written over two dozen literary anthologies and college textbooks and has received 11 honorary doctorates. 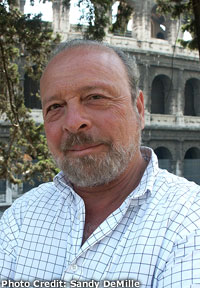 Nelson DeMille is the author of: By the Rivers of Babylon, Cathedral, The Talbot Odyssey, Word of Honor, The Charm School, The Gold Coast, The General’s Daughter, Spencerville, Plum Island, The Lion’s Game, Up Country, Night Fall, Wild Fire, The Gate House, The Lion, The Panther, The Quest, and Radiant Angel. He also co-authored Mayday with Thomas Block and has contributed short stories, book reviews, and articles to magazines and newspapers.

DeMille’s earlier books were NYPD detective novels. His first major novel was By the Rivers of Babylon, published in 1978 and still in print, as are all his succeeding novels. He is a member of The Authors Guild, the Mystery Writers of America, and American Mensa. He was a past president of Mystery Writers of America, Honorary Board Member of the Walt Whitman Birthplace State Historic Site, and International Thriller Writers ThrillerMaster of the Year in 2015. He holds three honorary doctorates: Doctor of Humane Letters from Hofstra University, Doctor of Literature from Long Island University, and Doctor of Humane Letters from Dowling College.

Nelson Richard DeMille was born in New York City on August 23, 1943 to Huron and Antonia (Panzera) DeMille. He moved as a child with his family to Long Island. In high school, he played football and ran track.

DeMille spent three years at Hofstra University, then joined the Army and attended Officer Candidate School. He was a First Lieutenant in the United States Army (1966–69) and saw action as an infantry platoon leader with the First Cavalry Division in Vietnam. He was decorated with the Air Medal, Bronze Star, and the Vietnamese Cross of Gallantry.

DeMille returned to the States and went back to Hofstra University where he received his degree in Political Science and History. He has three children: Lauren, Alexander, and James, and still lives on Long Island.

More information can be found online at www.nelsondemille.net

Anne Frank’s eagerness to read and write in the diary she received on her 13th birthday could not be diminished by World War II. WWBA is pleased to celebrate Anne Frank’s legacy, The Diary of a Young Girl, also known as The Diary of Anne Frank.

Born on June 12, 1929, Anne Frank was a German-Jewish teenager who was forced to go into hiding with her family and four others above her father’s office in Amsterdam. She spent over two years there and put together the stories which document and personalize the struggle for human dignity in the face of discrimination and genocide. In March of 1945, nine months after she and the others were betrayed and arrested, Anne Frank died of typhus at Bergen-Belsen concentration camp. She was 15 years old.

Anne Frank’s diary endures, not only because of the remarkable events she describes, but also because of her extraordinary gift as a storyteller and her indefatigable spirit through even the most horrific of circumstances.

One entry reads: “It’s a wonder I haven’t abandoned all my ideals, they seem so absurd and impractical. Yet I cling to them because I still believe, in spite of everything, that people are truly good at heart.”

Published in Amsterdam in 1947, Anne’s work received widespread critical and popular attention. When an English translation was published in 1952, it inspired the 1955 play The Diary of Anne Frank by the screenwriters Frances Goodrich and Albert Hackett, which they subsequently adapted for the screen for the 1959 movie version. The book is in several lists of the top books of the 20th century.

The Diary of a Young Girl promotes and nurtures literacy in the United States and around the world where it is read in 67 different languages. Selling over 30 million copies, her diary has become a pathway to literacy for generations of young adolescents. Anne Frank’s legacy continues more than 65 years after her death. and her story continues to educate and inform the need for tolerance worldwide. 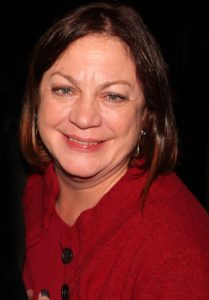 Deborah Weber is the General Manager of the Walt Whitman Shops in Huntington, NY, a position held since 1998. Walt Whitman Shops is one of the top 25 of 340 properties in the Simon Property Group Portfolio of shopping centers. In her position, Deborah has been a driving force for The Simon Youth Foundation, a national not-for-profit organization dedicated to the education of at-risk youth, through her implementation of regional programs that raise $1,000,000 annually.

Ms. Weber lives in Freeport with her husband, Christopher, and daughter, Kate, and is celebrating the upcoming marriage of her daughter,Tricia. 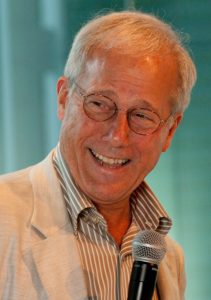 John Barr was born in Nebraska and grew up in the Chicago suburbs. Graduating from Harvard in 1965 with honors, he served in the U.S. Navy for five years and made three cruises to Vietnam. Barr received a Harvard MBA, graduating as a Baker Scholar in 1972. He has pursued parallel careers as investment banker and poet. As Managing Director at Morgan Stanley, he helped restructure the gas and electric utility industries. He founded three utility start-ups, including a specialized investment banking boutique, one of the first and largest gas marketing companies. All companies played leadership roles in their sectors.

John has published eight collections of poetry. These include The War Zone, which remains the only book of poetry published about the Naval war in Vietnam. Recently, he published a two-volume mock epic, The Adventures of Ibn Opcit, of which former Poet Laureate Billy Collins has written: “…not only does John Barr handle the demanding form of the long poem with skill and panache, but he delivers a one-of-a-kind linguistic tour de force”.

John was Board President of The Poetry Society for five years, Board Chairman at Bennington College for 12 years, and on the Board of Yaddo. He has also taught poetry in the Graduate Writing Program at Sarah Lawrence College.

In 2004 John Barr became the first president of The Poetry Foundation, established with a major gift from heiress Ruth Lilly. Under his astute financial and academic management, the Foundation created a family of programs that includes the largest global poetry website which serves 30 million readers, listeners, and viewers annually. He also guided the construction of a permanent home for poetry in Chicago that has received national recognition from the architecture community.

Penny Barr, John’s wife, also worked at the Poetry Foundation and is responsible for its children’s initiatives which include a Children’s Poet Laureate and two HBO collaborations, each receiving an Emmy for Outstanding Children’s Programming. John and Penny recently retired from the Foundation, and remain active in the poetry world.