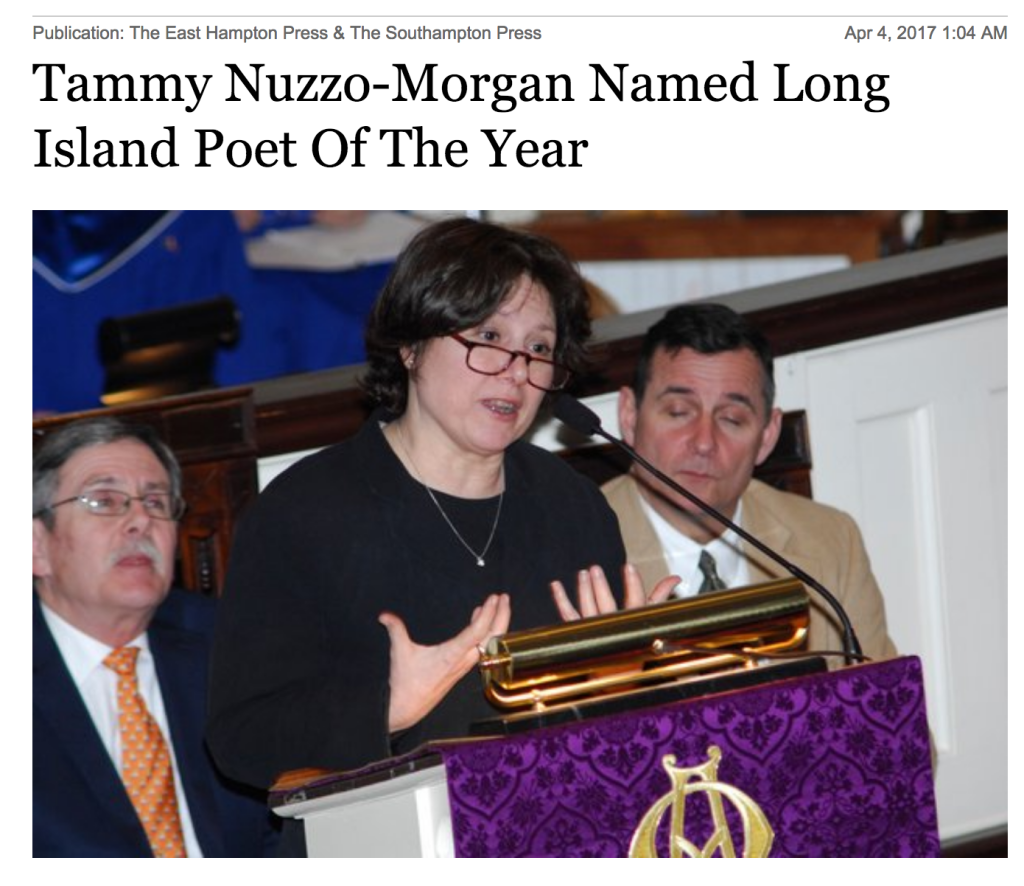 “You know, you write like a guy.” Those might be fighting words for another woman, but Tammy Nuzzo-Morgan took them as a high compliment, coming as they did from a fellow poet, in admiration of her down-to-earth style.
She describes her own work as confessional, or “housewife style,” explaining that Robert Lowell used the term to describe the work of Anne Sexton, the Pulitzer Prize-winning poet who pioneered modern confessional poetry.
“It’s not meant as a derogatory,” Ms. Nuzzo-Morgan said. “Anne Sexton wrote about items that we all understand in our everyday lives. Even if you never read poetry, you could grasp what she was trying to convey.”
The Walt Whitman Birthplace Association in Huntington recently named Ms. Nuzzo-Morgan Long Island Poet of the Year. A resident of North Sea since 1990, the Patchogue native was also Suffolk County Poet Laureate for 2010 to 2011 and has authored several books of poetry, including “Let Me Tell You Something,” which earned a Pulitzer Prize nomination in 2006.
While many might imagine a poet’s life to be spent in isolation, spinning words like silk in an ivory tower somewhere, Ms. Nuzzo-Morgan is very much a poet activist.
“Tammy and I have been working to promote poetry in Southampton and on the East End for over 10 years,” said Tom Edmonds, the executive director of the Southampton Historical Museum. “Her dedication to spreading the value of poetry in everyone’s life inspired me to become her impresario. I made her our poet-in-residence at the Southampton Historical Museum—she wrote the official poem for Southampton’s 375th anniversary in 2015—and I do all I can to spread her good news to our region and the world.”
It was Mr. Edmonds who nominated her for the Poet of the Year award, both for her artistic talent and commitment to the community. As founder of the nonprofit North Sea Poetry Scene, which she started “to enrich lives through poetry and literary programs,” Ms. Nuzzo-Morgan has brought poetry to schools, community groups and prisons.
She’s also an assistant professor in humanities at Briarcliff College, and is working on her Ph.D. dissertation, “The Healing Power of Poetry and the Creative Process.”
“Her poems are energetic, honest and speak from the deepest part of her soul,” Mr. Edmonds said. “They reveal Tammy’s rich and unfiltered self.”
Ms. Nuzzo-Morgan said she began writing poetry as a teenager, “to try to get out what was on the inside,” and she’s been refining her craft ever since. “I write about everything from going for a pap smear to watching two daddy longlegs. One time I was cutting back the ivy and that inspired a poem.”
When her son died at 17 in 1995, she turned to poetry as a coping mechanism. “You take the pain, the agony—you write as a form of therapy. Then, as a poet, you try and turn it into a piece of art. One of the reasons people listen to poetry is that we don’t want to feel isolated. We have all these stories in us, and they come out in different forms, and some of these forms are poetry. As the writer Roger Rosenblatt once said, ‘We go through the arduous task of learning how to speak just to tell the stories within us.’”
The poet said she doesn’t start a poem with an audience in mind. “When I write, I don’t write for other people’s critique—if I did, I’d never get a poem written. So I write for myself first and then I bring it to a group, and it’s like a baby just being born, it needs a little cleaning.”
Noting that Whitman was renowned for endlessly revising his work, she said she will often revise a piece repeatedly until it works as a snapshot of a place, a feeling, a memory. “If I write a poem about longing, and read it to a group in a nursing home, and they can relate to that, and I see a reaction in them, I know I’ve done my job.
“The state of poetry on Long Island is alive and well, and thriving, due to the work of people like Tammy,” said Cynthia Shor, the executive director of the WWBA, and a member of the committee that presented the award. “She has a strong voice; honest and articulate, caring and compelling.”
One of the ways poetry stays relevant is through artists who adapt to changing communication styles. Ms. Nuzzo-Morgan points to modern rap and hip-hop to point out the relevance of poetry in today’s world. “Sometimes I listen to them and I think, ‘Wow, they’re so much better than me.’ They’re poets in their own right, and it’s really powerful stuff.”
“Poetry is always going to change,” she said. “You know, language is not only a social construct, but it’s a base of power. That’s why every generation comes up with new slang to exclude the power base above them. If my daughter can exclude me by using a word that I don’t know, she’s created her own power base. It may be different than when [John] Donne was writing, but poetry will always have a place.”
An award ceremony for, and a reading by, Tammy Nuzzo-Morgan will be held on Sunday, April 23, from 2 to 4 p.m. at the Walt Whitman Birthplace Association, 246 Old Walt Whitman Road, Huntington. The program is free and open to the public.