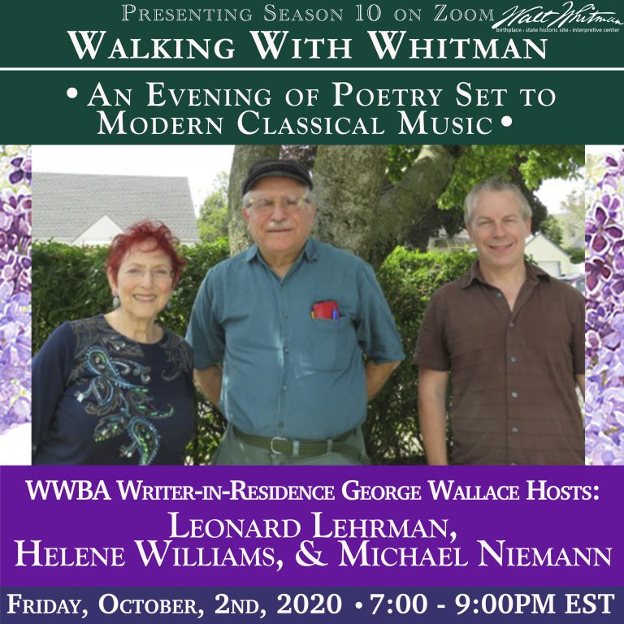 An Evening of Poetry Set to Modern Classical Music with Leonard Lehrman, Helene Williams, and Michael Niemann. This event was part of our Walking With Whitman Series.

LEONARD LEHRMAN is Long Island’s most prolific living composer; Editor of Boosey & Hawkes’ 3-volume Marc Blitzstein Songbook; and, with the blessings of Elie Siegmeister, Leonard Bernstein, and the Blitzstein family, completor of 21 works left unfinished by Blitzstein (1905-1964). His 12 operas, 7 musicals, and 233 other works have been heard on every continent except Antarctica. His 3500+ YouTube videos have been viewed over 775,000 times. He has also translated 64 poems, songs, plays and operas into English – from German, Russian, French, Romanian, Hebrew, Yiddish and Ladino. Long Island poets whose words he has enjoyed setting to music include Walt Whitman, William Cullen Bryant, George Wallace, Max Wheat, Patti Tana, Sally Ann Drucker, Irving Abram, Galina Leybovich, Orel Protopopescu, Richard & Gloria Rinderman, Jud Newborn, Carol Miller, Susan Astor, Marcia McNair, Lynn Green, Lorraine Mund, Pat Falk, Margaret Dinzler Shaw, Muriel Lilker, Fay Slavin Greenspan, Amber Rose, Grace Herman, and Marilyn Siegel Smith, among others. Six of his seven submissions to the 2020 York Theatre’s Songwriters in Mufti Competition won more votes than any other entries, including “Thinking Outside the Box” with George Wallace. In 1991-98 he was President, and later Archivist & Archivist Emeritus of The Long Island Composers Alliance, devoting himself then, as now, to quality performances of works by Long Island composers and writers, both present and past.

HELENE WILLIAMS has performed in 17 languages on 5 continents, and recorded with Opus One, Premier, Original Cast, Albany, Ravello, and Toccata Classics. She has sung and recorded more Blitzstein and more Lehrman (who has written 182 works for her, to date, including all 8 of the songs she is singing today) than any other living performer. Other specialties include Mozart, Schubert, Brahms, Debussy, Bernstein, and 30 Long Island composers. The Long Island Composers Alliance made her an honorary member of that organization in 2017. Co-Founder of Bronx Opera with Michael Spierman and of Court Street Music in Valley Stream with Leonard Lehrman, she founded Accent Reduction in English Speech and teaches & sings throughout the Metropolitan NY area and remotely.

MICHAEL NIEMANN has been High Holiday Cantor at The Metropolitan Synagogue since 1999, and has sung with New York City Opera, New York Gilbert & Sullivan Players and Chautauqua Opera, among others. His repertoire includes art songs, oratorio, musical theater and operetta, as well as the standard operatic repertoire. He performed leading roles in Lehrman’s operas The Triangle Fire and A Loveletter from Rosa Luxemburg in 2017 and 2019. He was also the baritone soloist in the “Weekend with Willard” concert, celebrating the centennial of J. Willard Roosevelt at Poquatuck Hall in Orient, NY, where he premiered several works, including Lehrman’s setting of a poem by Willard’s father-in-law, E.E. Cummings, which he repeats on this concert.