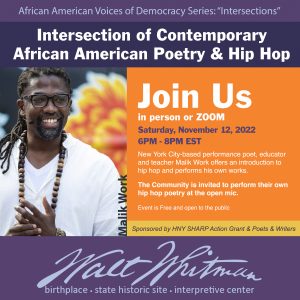 The Community is invited to perform their own hip hop poetry at the open mic.

Malik Work is a NYC based, born and raised actor-writer-musician. He is a founding member of The Real Live Show, a groundbreaking jazz/hip hop conglomerate. He’s written and performed a hip hop musical called Verses @ Work, a one-man show that toured last year with the Public Theater, and has garnered him a nomination for Best Solo Performance at the AUDELCO Awards. His recent television credits include Broad City on Comedy Central and Blacklist: Redemption on NBC. Malik is also the voice of Planet Word, an immersive museum of the English language in Washington D.C. He’s composed and performed poetry for Webby Award-winning project People Not Property, an historic preservation and educational website for Historic Hudson Valley. He’s recently created a film interpretation of the first published African-American writer Jupiter Hammon’s An Essay on Slavery. The piece is on exhibit at Preservation Long Island’s Joseph Lloyd Manor, which is recognized as a national Literary Landmark.

Register to come to the event: https://docs.google.com/forms/d/1GYWV_IejXCGFCgb_Y7bNIORZbdcft_c1R21WM6HKlJk/edit

This event has a $5 suggested donation: