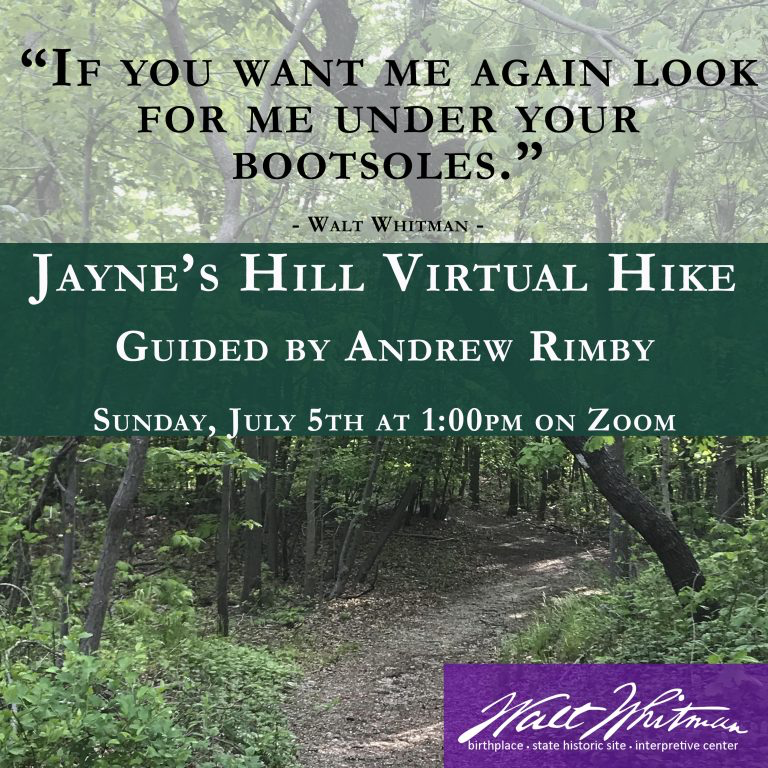 Jayne’s Hill Hike with Andrew Rimby: a guided hike to the highest point on Long Island to see the hike Walt Whitman took when visiting his childhood home in Long Island, New York.

Walt Whitman Birthplace Association is delighted to present a guided hike with Andrew Rimby on Jayne’s Hill; the highest point on Long Island. (See below for links mentioned in this video) July 4th, Independence Day, is the anniversary of when Whitman self-published his first edition of “Leaves of Grass”; our event takes place the day afterward when Whitman would be excitedly promoting his monumental new book.

Sea-beauty! stretch’d and basking!” are the opening lines of Walt Whitman’s “Paumanok,” a poem that explores Long Island’s natural beauty, especially the Long Island Sound and the Atlantic Ocean. Whitman’s fascination with the natural water that surrounds Long Island comes from his knowledge of Jayne’s Hill, the highest point on Long Island. Whitman returned to Jayne’s Hill at least twice after moving from West Hills in 1823 with his family. He enjoyed the view that captured the woods, fields, and beaches of Long Island. He was known for venturing out from dawn to dusk taking in Long Island’s scenery with some food, water, and a good book in his hand. What better way to capture Whitman’s spirit than walking the same trail that he would have taken to get up to Jayne’s Hill and take in a few poems about Paumanok (how Whitman referred to Long Island).