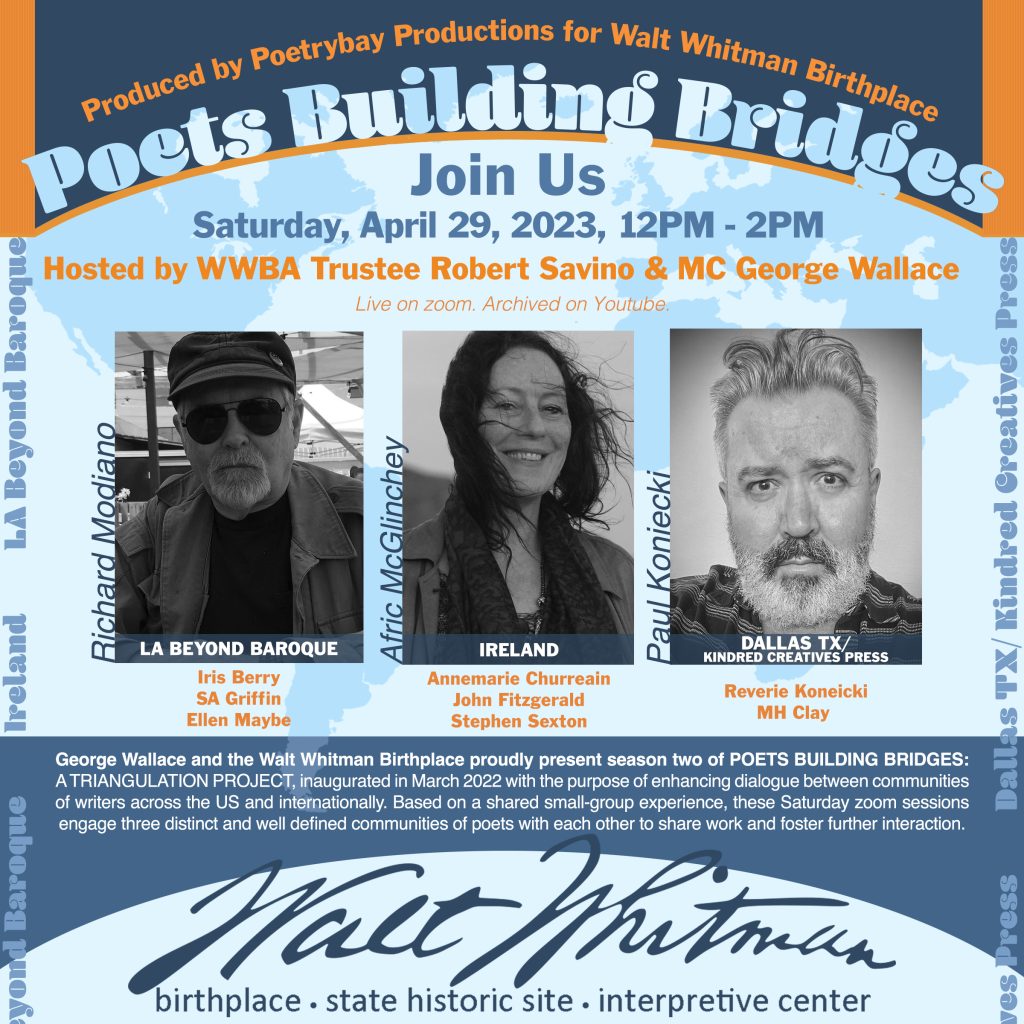 Season One triangulated groups by location — from the US, UK, Italy, South America, the Balkans, the Near East and India.

Richard Modiano attended the University of Hawai’i and New York University. While a resident of New York City he became active in the literary community connected to the Poetry Project where he came to know Gregory Corso, Allen Ginsberg, Anne Waldman, William S. Burroughs and Ted Berrigan.  In 2001 he was a programmer at Beyond Baroque Literary/Arts Center, joined the Board of Trustees in 2006 and from 2010 to 2019, he served as Executive Director. In that time he produced and curated hundreds of literary events. Richard is a rank and file member of the Industrial Workers of the World. In 2019 he was elected Vice President of the California State Poetry Society. The Huffington Post named him as one of 200 people doing the most to promote American poetry. In 2022 the Los Angeles-Long Beach Harbor Labor Coalition awarded Modiano the Joe Hill Prize for labor poetry. His collection The Forbidden Lunch Box is published by Punk Hostage Press.

Iris Berry is a native Angeleno and one of the true and original progenitors of the  L.A. punk Scene. She is the author and editor of several books and has a vast fan base for her unique voice and formidable writing style. She’s an L.A. Pop culture historian, actress, and musician. She’s appeared in numerous films, TV commercials, documentaries, and iconic rock videos. In   the 1980s & 90s she sang, performed and wrote songs with the Lame Flames, the Ringling Sisters, the Dickies, the Flesh Eaters and Pink Sabbath. She served four years on the Board of Directors for Beyond Baroque Literary/Arts Center. In 2009 she received her 2nd Certificate of Recognition Award from the City of Los Angeles for her contribution as a Los Angeles writer, and for her extensive charity work. On Friday the 13th of January in 2012 she co-launched with A. Razor their imprint PUNK HOSTAGE PRESS where she continues to champion and advocate for original voices.

S.A. Griffin, co-editor of Beat Not Beat and The Outlaw Bible of American Poetry (Firecracker Award) and Carma Bum progenitor. In 2010 he created The Poetry Bomb, a former Vietnam era practice bomb converted into an art object filled with over 900 poems from around the world in an effort to inspire civil disagreements culminating in The Poetry Bomb Couch Surfing Across America Tour of Words. Named Best Performance Poet by the LA Weekly, in 2011 he was the first recipient of Beyond Baroque’s Distinguished Service Award. His most recent book, Pandemic Soul Music is forthcoming from Punk Hostage Press. Husband, father and USAF Vietnam era veteran, S.A. lives, loves and writes in Los Angeles.

Ellyn Maybe, Southern California based poet, United States Artist nominee 2012, has performed both nationally and internationally as a solo artist and with her band. Her work has been included in many anthologies and she is the author of numerous books. She also has a critically acclaimed poetry/music album, Rodeo for the Sheepish (Hen House Studios). In addition to her band, her latest poetry/music project is called ellyn & robbie.  Their album, Skywriting with Glitterhas also received high praise.

Afric McGlinchey is based in West Cork, Ireland. Winner of the 2010 Hennessy Award for Poetry, 2012 Northern Liberties Prize (USA) and the 2015 Poets Meet Politics Prize, her collections include The lucky star of hidden things (Salmon Poetry, 2012), Ghost of the Fisher Cat, (2016) – both translated into Italian  – and Invisible Insane (SurVision, 2019). Her most recent publication is a prose poetry memoir, Tied to the Wind (Broken Sleep Books, UK, 2021), for which she received an Arts Council of Ireland Literature Bursary. A freelance editor and reviewer, she also mentors for the Munster Literature Centre and Words Ireland.

Annemarie Ní Churreáin comes from the Donegal Gaeltacht. Bloodroot, published by Doire Press in 2017, was shortlisted for the Shine Strong Award and the Julie Suk Award. She is a recipient of a Next Generation Artist Award and co-recipient of the Markievicz Award. She has received literary fellowships from USA, Germany and Scotland and was Writer-in-Residence at NUI, Maynooth, and Centre Culturel Irlandais in Paris. The Poison Glen is her first collection with The Gallery Press.

John FitzGerald was born in Cork in 1962. He won the Patrick Kavanagh Poetry Award in 2014 and was shortlisted for a Hennessy Award in 2015. A chapbook, First Cut, appeared in 2017, followed by Darklight, a limited edition, in 2019. A recipient of a Key West Literary Bursary, John FitzGerald has lived in Dublin, London and Florence, and since 1995 has worked as University Librarian at University College Cork. He lives with his family on their farm in Carrigdarrery, County Cork. The Time Being is his first collection with The Gallery Press.

Stephen Sexton’s first book, If All the World and Love Were Young was the winner of the Forward Prize for Best First Collection in 2019 and the Shine / Strong Award for Best First Collection. He was awarded the E.M. Forster Award from the American Academy of Arts and Letters and the Rooney Prize for Irish Literature in 2020. He was the winner of the National Poetry Competition in 2016 and the recipient of an Eric Gregory Award in 2018. Cheryl’s Destinies was published in 2021, and was shortlisted for the Forward Prize for Best Collection.

Paul Koniecki lives in Dallas, Texas. He was once chosen for the John Ashbery Home School Residency. His poems feature in Richard Bailey’s movie “One of the Rough” distributed by AVIFF Cannes. Paul proudly sits on the editorial board of Thimble Literary Magazine. His poems have appeared in Henniker Review, Chiron Review, Gasconade Review, As It Ought To Be Magazine, Trailer Park Review, Poetry Bay, and many more. Paul is currently finishing his MFA at VCFA.

Reverie Koniecki is a writer living in Dallas. She earned her MFA in Poetry and Nonfiction at New England College. Her work can be found at Guernica, Multiplicity, Rigorous, and other places.

M.H. Clay was born outside Royston, England, Cambridgeshire, and has traveled the world, made music, poetry, plays, and worked in corporate America, but his primary badge of self-identification is his art. Having made his professional living in many places throughout the southwestern United States, Europe, and Asia, he credits his experiences during these years of travel with helping to shape his world view, and by extension his writing and literary personality. He has been a thrice-featured poet at the Blackwater International Poetry Festival in Ireland, as well as a panelist at Poetry International Rotterdam. His appearances have included readings for Wordspace Dallas, the Pandora’s Box Poetry Showcase, Lucky Dog Books, Inner Moonlight, Verse & Rhythm, and various open mics around the Dallas/Ft. Worth area since 2003, and, since 2009, has served as poetry editor of the Mad Swirl zine and website.