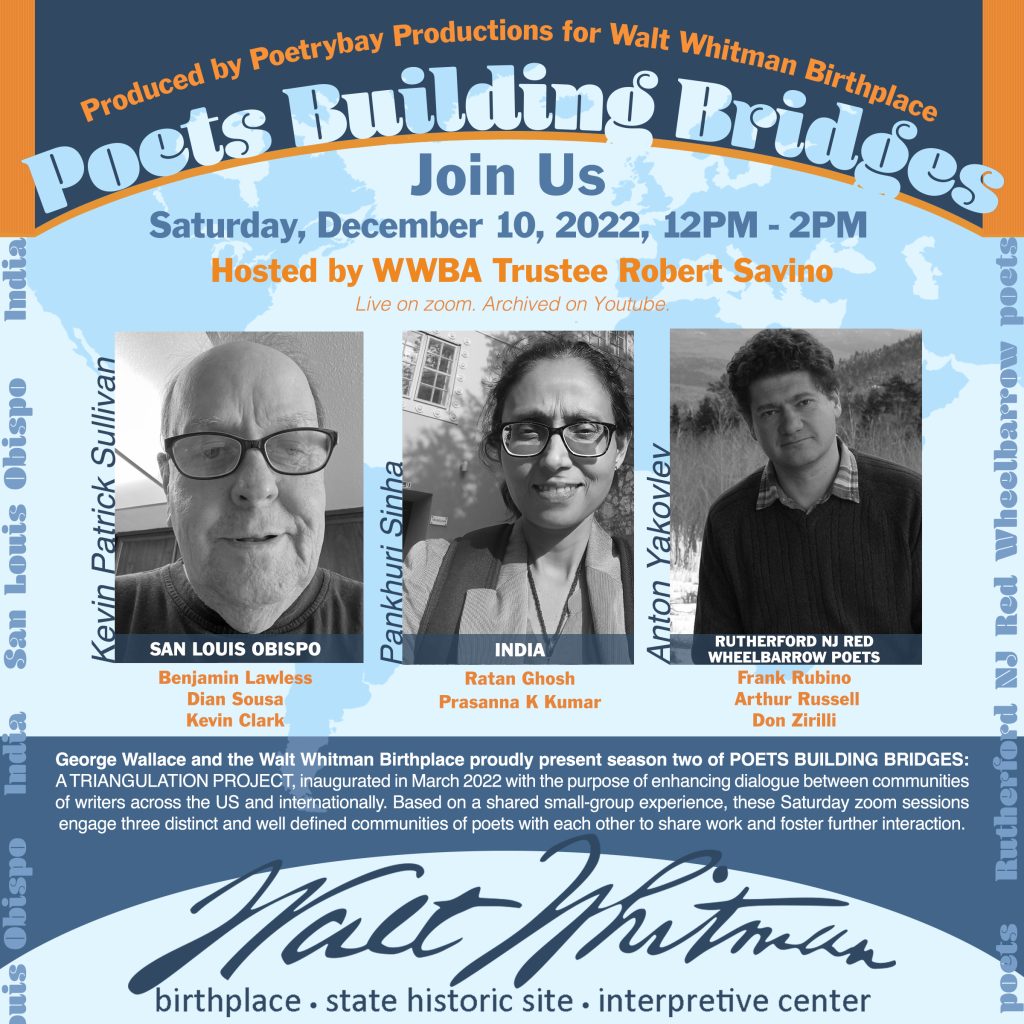 Kevin Patrick Sullivan’s life has been guided by the stars – the ocean – the light falling through trees, having been on the Central Coast of California for 48 years and a retired landscaper from San Luis Coastal Unified School District. Sullivan’s books include, First Sight, The Space Between Things, Under Such Brilliance and Unimpaired. His poems have appear in such journals as Artlife, Askew, Solo, Solo Novo, Cafe Solo, Hummingbird, Lummox, Miramar ,Salt and several anthologies including,  Sometimes In The Open- Poems From California’s Poets Laureate: Great Weather for Media, and Other Voices International. He was the editor with his wife, Patti Sullivan of the anthology, Corners of the Mouth-A Celebration of Thirty Years at the Annual San Luis Obispo Poetry Festival. He was declared a “cultural asset” by the City Council of San Luis Obispo in 2001. Kevin is a Poet Laureate Emeritus (2003) of  the City of San Luis Obispo. In 1984 he co-founded and continues to curate the Annual San Luis Obispo Poetry Festival.

Benjamin Daniel Lawless is a friend to people and poetry. He runs Penciled In, a book design and publishing company, and has designed over 60 books since 2005, including founding a 4 issue literary journal called if&when. He wrote two collections of poetry: There is Nothing Poetic About Fish (2008) and The Last Spelling Bee (2011). His third collection, Everything Bubbles to the Surface is due to be released once he takes a breath.

Dian Sousa is a poet and activist. Her poems have appeared in numerous journals; most recently including The Prairie Schooner, The Banyan Review, Great Weather for Media, American Poetry Journal, The Gavea-Brown Journal of Portuguese American Poetry, and Margins/Margens: A Teaching Anthology of Portuguese Migrant and Ethnic Literature in North America. She has been nominated for two pushcart Prizes. She is the recipient of a Fellowship to the DISQUIET  Literary Program in Lisbon, Portugal. She is a former San Luis Obispo Poet Laureate. She’s the author of four books of poetry. She lives and surfs in Los Osos California.

Pankhuri Sinha is a bilingual poet, story writer and translator from India. Two poetry collections published in English, two story collections published in Hindi, six poetry collections published in Hindi, and many more are lined up. Has been published in many journals, anthologies, home and abroad. Has won many prestigious, national-international awards, like the Girija Kumar Mathur Award, Chitra Kumar Shailesh Matiyani Award, Seemapuri Times Rajeev Gandhi Excellence Award, First prize for poetry by Rajasthan Patrika, awards in Chekhov festival in Yalta and in Premio Besio Poetry competition in Italy, Sahitto award in Bangladesh, and Premio Galateo in Italy for poetry in mother tongue. Has been translated in over twenty seven languages. She has studied in Delhi University, Symbiosis Pune, SUNY Buffalo, and  the University of Calgary, Canada. She has worked in various positions as a journalist, lecturer and a content editor. Has done writing residencies in Hungary and Bulgaria, and attended the Tranas Literature Festival in Sweden.

Dr. Ratan Ghosh, PhD, an Associate Editor of an International Literary Journal entitled “THE MIRROR OF TIME” (ISSN-2320-012X), Free Lance Writer, Poet, Short Story Writer and a Novelist from India. His poems have been featured in many National and International Magazines, E- Journals, Journals and Paper-Back Anthologies across the globe. He is the state president of Paschim Banga English Academy, an International Literary Organization. He has published three International Books entitled: MY LOVE, THE WEEPING SOUL: SELECTED POEMS by Ratan Ghosh and QUOTABLE QUOTES.

Prasanna Kumar is a trilingual poet (English + Hindi+ Telugu) whose poetry appears in more than 20  National and International anthologies.A social worker by profession, Prasanna’ s poetry is translated into Arabic, Chinese, Hungarian,and assamese languages. Had a book to his credit “Pearl of Euphoria” co-written with Mari Felicis- Philippines.  He received many accolades from several poetry forums in Latin countries, France, Egypt, Morocco, Italy, and the US. He holds a Masters degree in Commerce and lives in Andhra Pradesh, India.

Anton Yakovlev’s latest poetry chapbook is Chronos Dines Alone (SurVision Books, 2018), winner of the James Tate Prize. He is also the author of Ordinary Impalers (Kelsay Books, 2017) and two prior chapbooks. His poems have appeared in The New Yorker, The New Criterion, The Hopkins Review, upstreet, Poetry Daily, and elsewhere. His book of translations The Last Poet of the Village: Selected Poems by Sergei Yesenin came out from Sensitive Skin Books in 2019.

Frank Rubino co-hosts a poetry workshop and organizes readings at The Red Wheelbarrow Poets in Rutherford, New Jersey. Rubino’s poems have been published in Thimble, Chaleur, The Aesthetic Apostle, and DMQ Review, and he was the featured poet in The Red Wheelbarrow’s 2021 annual journal.

Arthur Russell is the winner of Brooklyn Poets Poem of the Year (2015) and a runner up for the same award in 2021. His poem “Jaime” placed second in the Allen Ginsberg Award (2021). For the Red Wheelbarrow Poets of Rutherford, NJ, he is the co-leader of the weekly workshop, co-director of the monthly reading series, and co-editor of the annual journal. His chapbook Unbent Trumpet was published by Nutley Arts Press (2017).

Don Zirilli (zirealism.com) was a finalist for the James Tate Prize and a nominee for Best of the Net and the Forward Prize. He edited Now Culture and is on the board of Red Wheelbarrow Poets, Inc. His poetry was published in The 2River View, Anti- poetry magazine, ART TIMES, Nerve Lantern, Posit, River Styx, and other periodicals and anthologies. He and his wife live in a tranquil corner of New Jersey with two dogs and a cat. His chapbook Heaven’s Not For You was published in September 2018 by Kelsay Books.