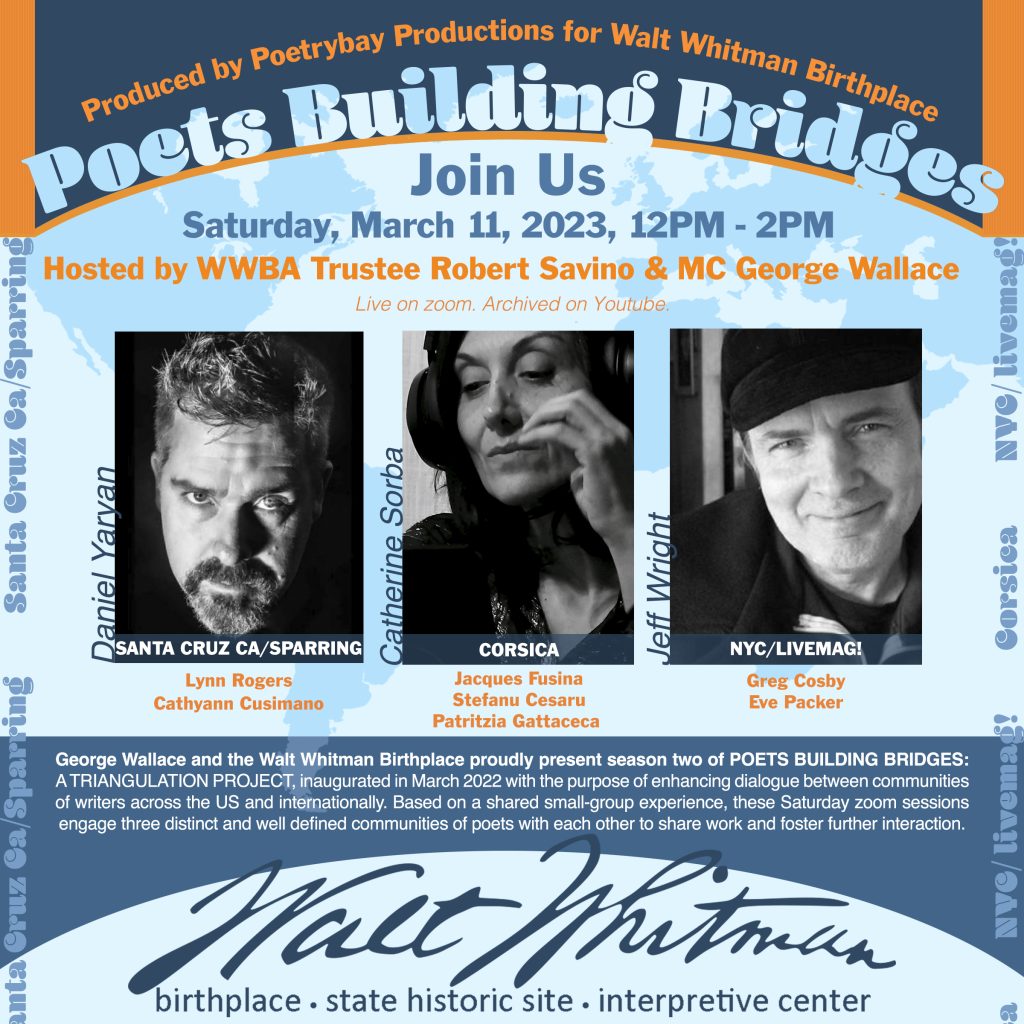 Daniel Yaryan is an American poet-author, publisher, editor and event producer. He is best known as the creator of the long-running Sparring With Beatnik Ghosts multimedia event series and literary anthologies. L.A. poet Wanda Coleman described Yaryan as “one of the new generation of poetry mavens.” (Poetry Foundation). He is founding publisher of the Mystic Boxing Commission imprint. Yaryan publishes avant-garde, counterculture books such as novelist Jerry Kamstra’s Weed: Adventures of a Dope Smuggler (new illustrated edition); the illuminated Sorcerers: Through Dimensions Infinite (a collaboration with artist Fitz); and the Sparring With Beatnik Ghosts Omnibus: Deluxe Edition (Vol. 1: Michael C Ford Edition)

Lynn Rogers MA is a novelist, artist and human rights advocate. She earned a BA In Transpersonal Psychology at Antioch San Francisco in 1988, with an MA In Transpersonal Studies at Atlantic University in 1991; her thesis focused on Women’s Spirituality. She is the author of 14 books beginning with Born in Berkeley (an underground classic including life as a teen on the 60s road with Beat icon Neal Cassady). She is well-reviewed, including by Gary Singh of Silicon Valley Metro, who said “she will one day put our area on the world literary map.” In 2011 she was awarded Woman of Achievement by the National League of American Penwomen in both literature and art. In 2017 she was a featured author at San Jose State in their Local Lit program for her 2016 novel, The Last Piano Bar. In 2019 she won art awards from the Triton Museum in Santa Clara. She has hosted and read at many Sparring With Beatnik Ghosts events including at the Beat Museum in San Francisco.
Cathyann Cusimano is a beat poet of energy and illumination. She shines a light on whatever catches her attention, puts the images in a blender and hits the gas. Cathyann enjoys creating works of art out of a multitude of media and making an adventure out of spontaneous experiences. Cathyann has been included in 2 Great Weather for Media anthologies, Fresh Hot Bread, Voices Israel, and Sparring With Beatnik Ghost anthologies. She has published 5 books of poetry: Being Myself on Fire, The Soul Made Visible, The Main Content, Ordinarily Divine and Walking Down The Street With the Sound of Life in Her Eyes. Her next book of poetry: Roadtrips, Fantasies, and Lava Flows is due to be released late 2022.

Catherine Sorba is a Corsican movie & theater director, writer, actress, living between Paris, Bastia & NY. After studying at The Conservatoire National Supérieur d’Art Dramatique in Paris, she founded her own theater company. Her motto : push boundaries of fiction on stage and explore the reality in documentaries. Rewarded in 2018 by the Sundance Institute for her short film « DA E STELLE A E STELLE » ; she’s a long time fellow of the “Theatre Aleph” and his founder, the Chilean dramaturge Oscar Castro. Since 2013, she’s in artistic partnership with LAFAYETTE COLLEGE, Easton, PA.

Jacques Fusina, Emeritus Professor at the University of Corsica, was Chairman of the Conseil de la Culture de la Corse (1989-1991). A versatile writer, he is one of the most eminent spokesmen of Corsican poetry. List of publications : Lepetit soldat (Albiana 2015), Parlons corse,( L’Harmattan, 1999), E sette chjapelle, (Albiana 1986) Versu cantarcciu, (Albiana 1996) La fougère: onze poètes corses,( Editions Dell’Orso, Italy, 2005).
Stefanu Cesari was born in 1973. He devotes his life to French and Corsican poetry. He has also translated contemporary poetry and contributed to many magazines and anthologies. He stages poetic readings in the “Halo”, in Bastia, Corsica. During workshops, he blends his poetic production with electronic music and polyphonic songs. In 2019, he was awarded the “Prix Louis Guillaume du poème en prose” for his Bartolomeo in cristu. List of publications : Memoria di a notti/ Mémoire de la nuit, Albiana (2002) A lingua ‘lla Bestia/ Forme animale, A Fior di carta (2008) Genitori, Presses littéraires (2010) Le moindre geste/ U minimu gestu, Colonna (2012) Bartolomeo in cristu, éditions Eoliennes (2018) Prighera par l’armenti / Prière pour le troupeau, Cahiers de l ‘Approche (2019) Peuple d’un printemps/ pòpulu d’una branata, éditions Eoliennes (2021) Soleil en maison 5, Lektos éditions (2022).
Patrizia Gattaceca is a versatilE artist, poet, musician and actor from the Riacquistu cultural rivival. She is well know in and out of Corsica as singer-songwriter and poet. In addition to her extensive discography, Patrizia is the author of six poetry collections published in corsican, french and inglish. Her poems are also published in various journals and anthologies. Gattaceca’s poetry holds all in an imagery of moons and mountains and sea and underneath it all, the taut sensation of loss and sorrow, the heartfelt exploration of loneliness of the human condition, and, as her mentor Ghjacumu Thiers describes, « the infinite within the finite. » His writing is rooted in the earth and everyday life, thus taking on a universal meaning.

LiVE Mag! publisher and editor Jeffrey Cyphers Wright is author of 18 books of verse, including Blue Lyre and Party Everywhere. Recent poetry is in New American Writing, The Café Review, Stat-O-Rec, and Best American Poetry. He’s a Kathy Acker Award winner for poetry and publishing, and has had recent residencies at eMediaLoft and Howl! A book of sonnets and artwork called Doppelgängster is forthcoming. jeffreycypherswright.com

Gregory Crosby is the author of Said No One Ever (2021, Brooklyn Arts Press) and Walking Away From Explosions in Slow Motion (2018, The Operating System).

Eve Packer, a Bronx born poet and actor, has three books of poetry out from Fly by Night Press. Her latest book, no mask, no talk, is forthcoming from Autonomedia (2021). She won two Downtown Poet of the Year Awards, and a Time to Consider: the Arts Respond to 9/11 Award, among others. Packer holds degrees from the University of Michigan, the London School of Economics, and N.Y.U., and currently teaches English at Westchester Community College. She coordinates What Happens Next, a loose collective of poets and artists, and she swims daily.