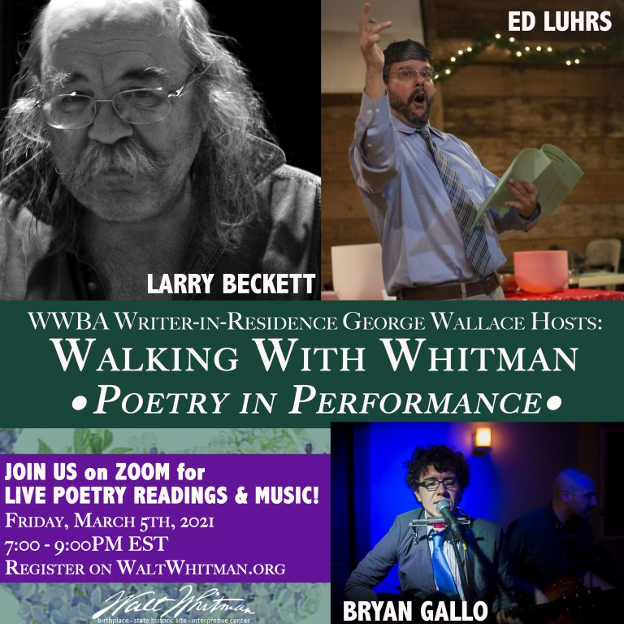 Walking With Whitman Poetry in Performance series featuring Larry Beckett and Ed Luhrs with music by Bryan Gallo. Now in its 11th season!

Larry Beckett, born April 4, 1947, is an American poet, songwriter, and literary critic. While attending high school in Anaheim, he made friends with classmate Tim Buckley, which launched them into writing songs, including the modern standard, Song to the Siren. His poetry ranges from brief lyrics and songs to blank sonnets, collected in Songs and Sonnets, to 100-page narrative poems: Paul Bunyan, Wyatt Earp, and Amelia Earhart are in print. His book Beat Poetry is an anthology and study of the poetry of the fifties San Francisco renaissance. For 47 years, Beckett worked on the epic American Cycle, a series of long poems, including: U. S. Rivers: Highway 1, Old California, Paul Bunyan, John Henry, Chief Joseph, Wyatt Earp, P. T. Barnum, Amelia Earhart, Blue Ridge, U. S. Rivers: Route 66. American Cycle will be published in April 2021 by Running Wild Press in Los Angeles.

Ed Luhrs started his craft years ago and remains an active participant at events on Long Island and in New York City. His interests, reflected in his writing and performance, include theatrical monologue, humor, dialect, folklore, ancient history, as well as orchestral, jazz, and traditional folk music.

Bryan Gallo is a Long Island based singer-songwriter who is inspired by the pressures and consequences of living life romantically. Intrigued by both the sounds of alternative country-rock and wistful pop music, he embarked on a career as a performing singer-songwriter and began to pen songs that would be deeply personal but still readily accessible. Steeped in reflective heartache, the lexicon of Gallo’s lyrics stands as a testament to his raw talent as a musician while weaving a flush and relatable narrative. In 2014, he self released The Party Guest, a debut full length album of all original material produced by Pete Mancini which featured the Roots-Rock band Butchers Blind who served as the album’s session musicians. At the tail end of 2015, Gallo recorded and released an EP of Christmas themed original songs and standards titled Santa Songs, that was self produced with production and engineering assistance from Mick Hargreaves. Bryan is currently at work on new recordings which he hopes to release to the public in 2021. For all further information, including performance dates, recordings, social media links, and more, please visit Bryan’s official website at bryangallo.com