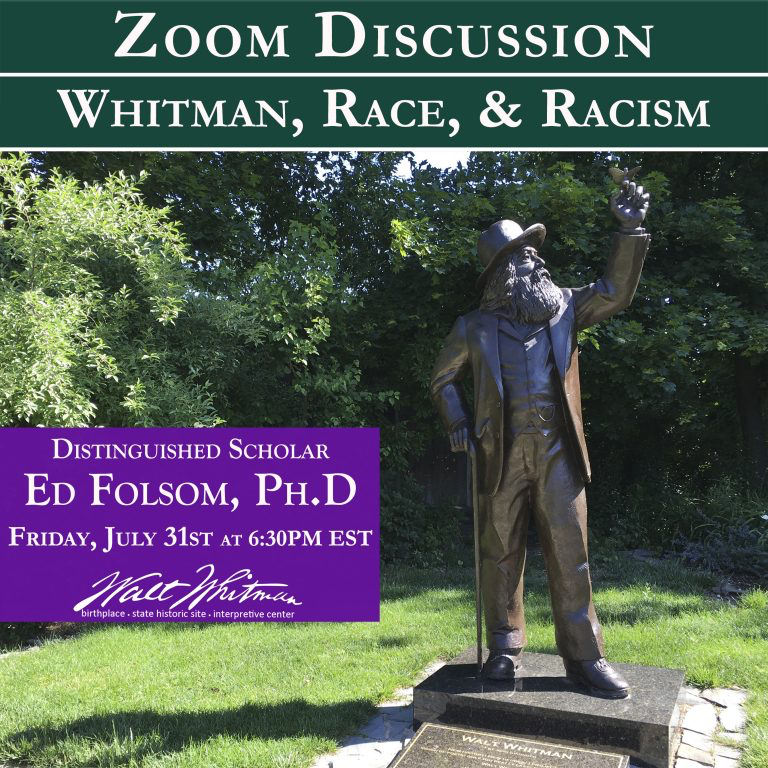 WWBA is delighted to present “Whitman, Race, & Racism”, a discussion with Distinguished Whitman Scholar and Professor Ed Folsom, Ph.D. This historical program focuses on Whitman, a Civil War era poet, who proclaimed his love for democracy in his writing. Professor Folsom will include facts about Whitman’s writings on race, Black writers’ responses to Whitman over the past 125 years, and the current conversation about the Whitman statue situated at Rutgers University-Camden.

Ed Folsom’s teaching and research have centered on nineteenth- and twentieth-century American poetry and culture. He has been particularly interested in the ways American poets have talked back to Walt Whitman over the years, and how Whitman tapped into American culture in surprising ways to construct a radical new kind of writing. He has written, edited, or co-edited a number of books on Whitman, including Walt Whitman: The Measure of His Song (Choice “Outstanding Academic Book,” Independent Publisher Book Award for Poetry), Walt Whitman’s Native Representations (Choice “Outstanding Academic Book”), Walt Whitman and the World, Walt Whitman: The Centennial Essays, Whitman East and West, Whitman Making Books / Books Making Whitman, Leaves of Grass: The Sesquicentennial Essays, Walt Whitman’s Democratic Vistas: The Original Edition, and Re-Scripting Walt Whitman (co-authored with Kenneth M. Price). Ed has directed or co-directed a number of the major national and international Whitman conferences of the past few decades, including a symposium on Whitman in Translation, the 1992 Walt Whitman Centennial Conference, a 2000 conference on Whitman in Beijing, China, and a 2005 symposium at Iowa on Whitman as a bookmaker. In 2005, the sesquicentennial of the publication of the first edition of Leaves of Grass, he gave the keynote talks at four national and international Whitman conferences. In 2011, he organized a symposium of ten Whitman scholar/translators from around the world. He helped organize and has frequently taught the Transatlantic Whitman Seminar, held each summer in a different international location. Ed has also written about twentieth-century American poets like William Carlos Williams, W.S. Merwin, and Gary Snyder, as well as other nineteenth-century writers like Frederick Douglass and Emily Dickinson. He has been a leader in the development of Digital Humanities, co-editing a CD-ROM archive of Whitman’s work, co-directing the Walt Whitman Archive, preparing the Whitman bibliography for Oxford Bibliographies Online, and in 2014 teaming up with Christopher Merrill to teach “Every Atom: Walt Whitman’s ‘Song of Myself,’” Iowa’s first MOOC. Winner of Iowa’s Collegiate Teaching Award, the Graduate College Outstanding Mentor Award, the university’s President and Provost’s Teaching Award, and the Regents’ Award for Faculty Excellence, Ed teaches courses on nineteenth- and twentieth-century American literature, including a survey of American poetry, and doctoral seminars on Whitman, Dickinson, and the history of American poetry. He edits the Walt Whitman Quarterly Review and the Whitman Series for the University of Iowa Press.